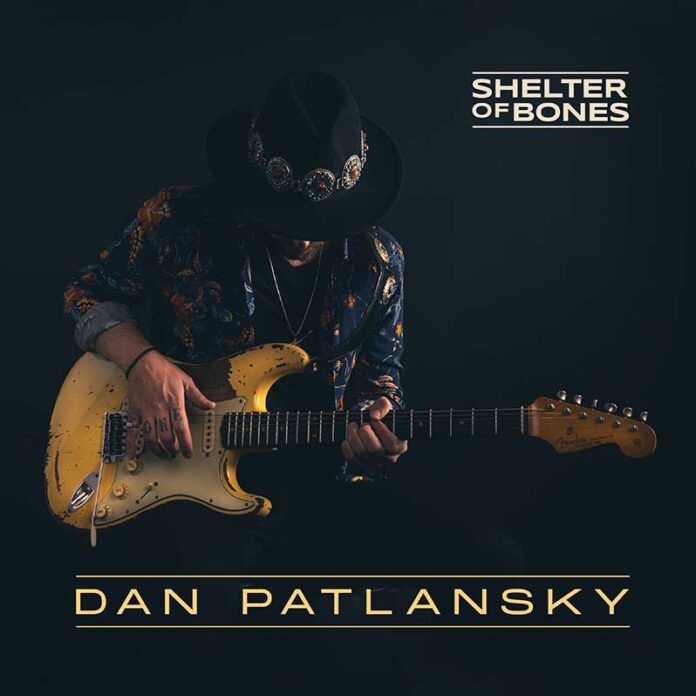 I started this website in September 2014. Along the way I have been extremely lucky to have experiences that I never dreamed of when I planned it. Whether it was meeting heroes, sitting at the Royal Albert Hall reviewing a gig that I would have killed to be at anyway, or seeing my reviews on backdrops of merchandise tables – it’s been brilliant.

Perhaps the best thing, though, is the fact that I feel like I have seen some artists develop with MV. Dan Patlansky is very much one of these. Ok, he had been around a while before I reviewed “Dear Silence Thieves” back in 2015, but “Shelter Of Bones” is the fourth of his records that have appeared on these pages – and it’s the most complete yet.

Rather like Patlansky, I guess, I am not a blues purist. I am on nodding terms with the three Kings (and only then because Bonamassa stuck a record out with their tunes on) but I’ve always considered this to be just fine, because  I know skill when I hear it, and I know when I am in the presence of greatness.

“Soul Parasite”, the opening song here, is more groove than Chicago blues. More blind anger than Blind Willie Johnson. And never mind the solo that could strip paint off the walls, this is a record that is more personal than perhaps anything else he’s done. It’s looked at the world between 2019-2021 and it’s got some scores to settle.

“Snake Oil City” is a proper blues shuffle – over which Patlansky opines “the crooked politicians never get jail”. He says its about a fictional place based on his South African homeland – I could of course add that if you are English you get a scary questionnaire from The Met if you are a politician. That’s telling ‘em.

“Selfish Lover” is perhaps the catchiest here. It is perhaps the best song about quitting smoking ever made. “Lost” though, is simply gorgeous. The brilliantly picked out organ from Dean Barrett, the real emotion in the lyrics (the Doctors feared the worst when Patlansky’s wife was poorly, this was what he wrote when she recovered) and the wonderful, evocative guitar line make it one of his best ever songs.

“Bad Soul” tips the balance towards the primal “I like starting fires” offers the first line, and this explodes into its hook. “Presence” puts down the reflection and lives in the now, as it were, and gets funky as hell when it does. “I’ll Keep Trying” is almost confessional when it whispers its way through, and the vocals show the progression in his voice and repertoire too.

The fact that “Devils Dopamine” rails against social media almost guarantees it is a favourite of MV’s. I know its futile and impossible to resist Zuckerberg and his evils. That doesn’t mean we should accept it, mind you, and the desperation in DP here suggests he agrees.

“….Bones” is a record that deals in peaks and troughs. For every rocker there’s a ballad. For every piece of social commentary there’s a pause for thought. “Sweet Memories” does the latter. Drifting like a warm summer breeze, it’s a lovely thing.

Then there’s something in between. “Hounds Loose” is a choppy, short and sweet almost glam stomp. He’s sold his soul (stop me if you have heard that one before?) but my, this has a thing you won’t let go of.

The closing title track is as fragile as any Steven Wilson song. A message to his children about the world they’ll grow up in, its raw in its words, gentle in its feel. And it strikes a chord with anyone who wonders what sort of world kids will inherit. That should be all of us, but unfortunately it isn’t.

The record that it gives it’s name to, is probably the best of Dan Patlansky’s career – certainly his more recent works anyway. It’s not that it’s a radical departure, more that it’s just a natural evolution. His development has led him to this point, and “Shelter Of Bones” is a statement of intent that says: “I am not finished yet.”

Previous article
COUTTS AND ABOUT
Next article
BAND OF THE DAY: MY ONLY SOLUTION