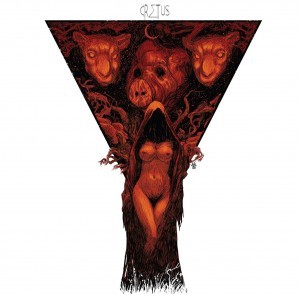 A few kind words from rock/metal legend like Pepper Keenan (Corrosion of Conformity, Down) does a band no harm. The man is responsible for countless riffs and memorable music so knows a good thing when he hears it and in the case of US mysterious occult rockers Cretus his well tuned ears do not deceive him.

A harmless little xylophone can sound quite chilling in the wrong hands. So it proves on the EP opener “Price of Immortality” which unsettles from the off before unleashing a few cutting doom-laden power chords to lift the track off the ground and into the blackened sky.

“Darkness Bites” keeps things moving in the right direction along similar veins to the opener before “What I Will”, which is possibly the best track, on an EP that has nothing but great tracks, steps the level up a notch or two. The vocals are clean and all the more powerful and emotive for it. There is a monster riff that rolls throughout the track and that’s the bleeding heartbeat.

“The Leader” opens its doors with a swift kick, thrashing riff and a pulsating dark energy. Combine that with a Motorhead-style riff pattern that drops subtlety and picks up pace, power and attitude and you are onto a winner.

The only mystery that doesn’t surround the band it that they are, as a live act and now on record, a formidable and powerful force. They are probably mad, bad and very dangerous to know but you will like them all the same. The band use all manner of facemasks and robes to keep their identities hidden and whilst in less able hands it could be a well-worn gimmick in these hands it seems a little more meaningful and no doubt adds to their live spectacle. That said the tracks alone should be more than enough for any right-minded soul of rock.

To close things out we have the eerie 7 ½ minute opus “Little Children”. It’s as spooky as the title suggests. From the opening guitar refrain to the gentle but chilling riff, it’s an ominous start. Then come the vocals “Little children don’t be afraid, we’re moving on to the next life”. The track is essentially in three parts with the first being a prelude to the hard rocking second half then it’s all ends in thrash maelstrom of biblical proportions. “I am the messenger” wails the frontman. Message received and understood. Now where do we sign-up? There is light to be found in the darkness.

Dux Mea Lux is out now on Pavement Music.

Donnie’s Rating: 9/10  Seek them out before they find you.