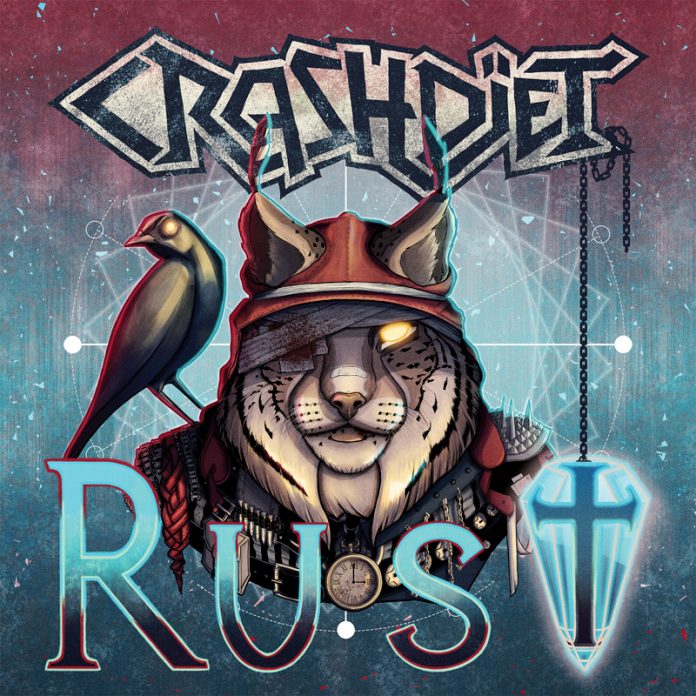 I always wonder if the likes of Crashdiet ever get bitter?

You couldn’t blame them if they did.

If they were around 35 years ago they’d have been huge. And we are talking Gold Disc in the bog big here.

The history of the band is, let’s say, turbulent and leave it at that. Deaths, suicides, drug addiction and – of course – one of their original members being the singer in Ghost. And yet, throughout it all, they’ve kept going.

Their manager died a few days before I saw them play live, last time, as if as to exemplify their status as sleaze rock’s greatest troopers. But then, therein lies the rub.

Because the sleaze rock tag that would have seen them raking cash while you’re raking grass (if we may be so bold as to quote Kid Rock, obviously…) back in 1989, is only part of what they are anyway.

It isn’t like they’re hiding it – crikey the intro to the title track here is pure “Dr. Feelgood” era Motley, but it isn’t like it defines them, either.

Because on “Rust” for example, there’s synth, there’s a huge arena shaking hook (and don’t think we don’t spot the Jovi nod, either) but there’s something modern going on too. So that for all the screeching CC Deville-ish solos Martin Sweet plays, this is a long way from a homage to Poison.

The six years since the release of “The Savage Playground” have seen Sweet – who produces here – regroup (and that means changing singers again) and refocus. The result is the most nuanced Crashdiet record.

“Into The Wild” for example, combines some Europe style stack harmony with a glam slam, but they follow this up with the brilliant “Idiots” an acerbic dismantling of “the haters, the fakers and the energy takers” over a slice of crunching metal. And make no mistake, this is heavy. And proudly so.

There’s balladry, of course there is, and for all that “In The Maze” has a bit of a Whitesnake thing going on, there is, you guess something a bit more autobiographical about the suggestion that “lying alone in my stone cold nothingness, I feel the emptiness”. Whatever, it makes this one a cracker too.

Eric Bazilian, once of the Hooters and who wrote “One Of Us” For Joan Osborne, “Old Before I Die2 for Robbie Williams – and you liked it, you know you did –  as well as the godwaful “Ugly” on Jon Bon Jovi’s “Destination Anywhere” record produces “We Are The Legion” and there is a feel that they’ve put all they can into making this one “the hit”.

For all that, though, “Crazy” is better. Sleazy, and letting its hair down. “Grinder on a pole” is exactly what you want a song about being in love with a stripper to say, and “Parasite” is so unashamedly 80s  that it probably wears spandex.

That said, there is “growth” and “maturity” here. Not least on the odd “Waiting For Your Love”, which is as beguiling as it is out of character, and whatever else you expected this to do, having one that sounded like Saxon probably wasn’t top of your list, but nonetheless “Reptile” does and “I pledge my allegiance to always have fun, a line here, might well be the point here of their entire careers.

“Stop Weirding Me Out” is the most Swedish glam, as it were. Hardcore Superstar, and H.E.A.T would love this, but then, neither of them would do “Filth And Flowers”, which gets its fists in the air and doesn’t half sound like Iced Earth. At Least it does until it goes like a power metal version of Skid Row’s “Riot Act.”

Not a line I thought I’d write when I started to review this – and actually, exactly why “Rust” shines better than anything else Crashdiet have done so far.