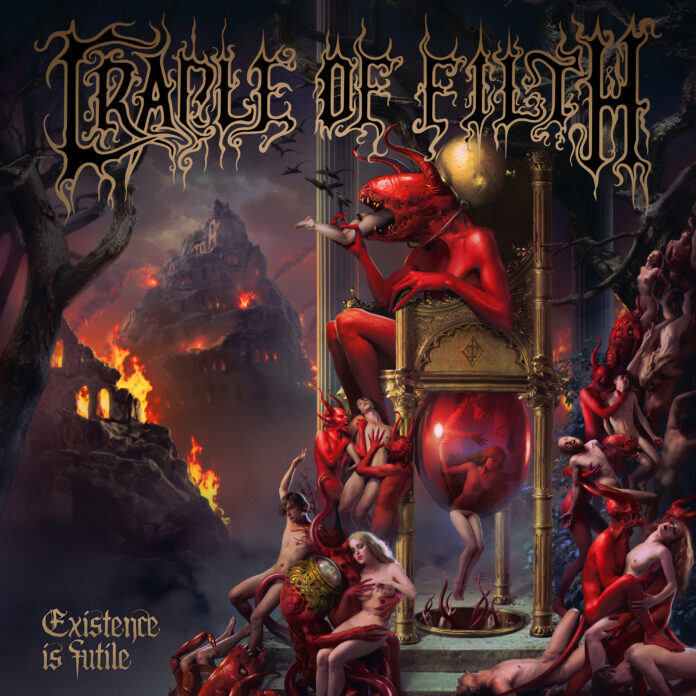 In the prelude to the release of the album, frontman Dani Filth, advised that this would be reminiscent of an old-school COF album, perhaps in the vein of Nmypthetamine but also keeping up with the bands modern direction which was illustrated on their last album 2017’s Cryptoriana – The Seductiveness of Decay.  On first listen it is fair to say he’s not wrong.  In fact he’s spot-on.

The album opens with a short but haunting instrumental piece before exploding into life, or death if you prefer, with a rhythmically ferocious track “Existential Terror” backed by the symphonic elegance that is the band’s trademark.  The gears shift more times than a Formula One driver but always with the intention of pushing forward.  By contrast “Necromantic Fantasies”, the next track, is even-paced save for the odd up-tempo lead guitar lines.  It is arguably COF at their finest, a little less screech in Dani’s vocals and lies on the lower end of the extremity scale, but showcases the full extent of what the band is capable of in all of their gothic cinematic glory.  Truly pushing beyond the boundaries that have often stagnated the extreme metal genre.

Renowned author of the obscure H.P. Lovecraft provides the inspiration for the gloriously rabid “Crawling King Chaos”.  The pulsating drumbeat and razor-sharp guitar work allows Dani Filth to vocally bleed all over this track.  The keyboards and orchestral backing vocals add an air of menace that draws you in like a foolish teenage victim in a slasher film.  The composition of the track is outstanding and once again just proves that when it comes to dark cinematic music in the minds of raging talented musicians with a penchant for the extreme they have no equals.

Across the albums 70 minute runtime, if you include the two bonus tracks, there is barely a wasted second.  It is beautifully crafted and executed with skill and a masterful touch, kudos to producer Scott Atkins for his work in bringing the madness to life in such a sonically pleasing way.

More standout tracks emerge out of the darkness in the shape of the brilliantly erractic “The Dying of the Embers” and a uber-paced “Us, Dark, Invincible” which is classic COF reset for 2021.  There is also a delight for horror fans with the guest appearance of Doug “Pinhead” Bradley, he of the Hellraiser franchise, as he lends his devil tongue to provide us with an ominous warning about the future of the human race in the backdrop of a progressively aggressive riff and familiar filthy vocals.

If there was any doubt about the place of Cradle of Filth in the pantheon of the great metal bands of the past three decades then it has been well and truly cemented with Existence is Futile. A finer album of any genre in 2021 your ears are unlikely to hear.