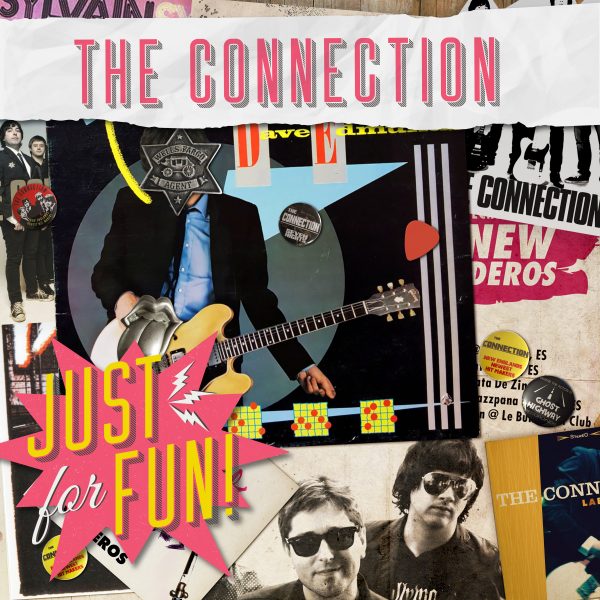 Sometimes, the title does it all for you.You sit down to write 500 ish words on a brand new release, only to find that the band have nailed the point in three.

That’s most definitely the case here as Rochester, New Hampshire rock n roll troupe The Connection get together and casually knock out ten covers just to tide them over until their new album.

Now, covers albums can be absolute rubbish. Or they can be gleeful and vibrant affairs and – at their best – can open the ears of the listener to the possibility of new bands.  This is most definitely one of the latter.

Indeed, MV found itself getting all nostalgic while listening to “Just For Fun.” Thinking of a time when Skid Row released B-side’s Ourselves” and it was the first time these ears heard bands like Rush. It would be cool to think that somewhere, there’s a kid who might pick up “….Fun” and then check out The Dictators, Sylvain Sylvain, Cheap Trick, The Stones, Bob Segar, Dave Edmunds, George Thorogood or any of the other artists on this ten tracker.

Of course, covers albums only work if the songs aren’t copies, but have the stamp of the band recording them on the new versions. That’s something that The Connection understand perfectly and it is absolutely possible to enjoy this without giving the originals any thought whatsoever.

It kicks off in rabble rousing, classic Chuck Berry shuffle style with Bob Seger’s classic “Get Out Of Denver” and you can almost see the ear to ear grins in the studio. “Stay With Me” (The Dictators model, not The Faces one) passes by in an explosion of harmonies, while “I Can Read Between The Lines” sounds like a Hollies song here.

A fabulous little record, “Other Guys Girls” will have you humming its chorus far more than you should, and the traditional standard, “Streets Of Baltimore” (it’s been done by everybody, but MV knows the Gram Parsons go the best) adds some country action (think Jason Ringenberg) while the timeless sounding take on Sylvain Sylvain’s “Teenage News” is a highlight amongst many.

The Connection deserve credit too, for eschewing the obvious in favour of the downright cool. Most bands, if they were going to do a Rolling Stones song, aren’t picking “No Expectations” from the Beggars Banquet album. These boys do and they kill it, making it sound even more laid back and world weary than the original.

Elsewhere, well to be honest, if you are in a power pop band and can’t nail “Southern Girls” by Cheap Trick then you aren’t trying very hard. Allowing for that though, Rick and the boys would be proud that it still sounds so good and Buddy Holly sits over this record like some kind of Godfather anyway, so his “Think It Over” is welcome.

Arguing about the merit of covers albums is something music snobs do. To them – and any other naysayer – we just offer this. “Just For Fun” is a record that is nigh on impossible to  listen to without a stupid smile on your face. That, for The Connection was always the point. The title said so.