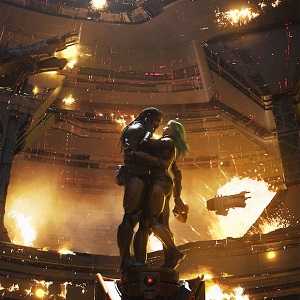 As even Coheed And Cambria singer and mainman, Claudio Sanchez puts it himself. “Concept records in themselves are not weird, but for a band to continue a concept over their discography can be a little intimidating to somebody on the outside. It’s like a monthly issue comic book, like, ‘I don’t want to get invested into this 10 issues in.’”

Now, I have to speak personally on this. I barely watch TV because I can’t be arsed with following a  plot, and genuinely can’t recall the last time I watched a film – it certainly hasn’t been in this decade.

All of which might present me a problem when it comes to this, the brand new CaC record. Sci-fi, mate? Couldn’t care less, if I am honest. And comics? Behave yourself! I am 43, last time I read one was Roy Of The Rovers when I was about 9.

So, I’ll adopt my usual policy when it comes to concept records (and it’s one that’s always served me well with Coheed in particular, given that this is their seventh in eight) the only criteria you can work to, if like me, you are totally ambivalent to the storyline, and not invested in the illustrated book that comes with “The Unheavenly Creatures” and its this:

Does the record work as music? Has it got great songs? And here, Coheed And Cambria never let me down. They are one of the best and most innovative prog metal (and I hesitate to give them that label, I just can’t come up with a better term) bands around.

And why? Because you can put “…Creatures” on and just get lost in the music. The piano led Prologue gives a clue as to the idea that for this return to concept records, they have pulled out all the stops (other reviews may well fixate on the story arc, I think its clear I have next to no interest). Instead all I know is that as a standalone cut, “The Dark Sentencer” is absolutely brilliant. Gargantuan metal with Travis Stever proving he is an incredible guitarist, and that voice, well Sanchez is magnificent.

The title track with its 80s  Commodore 64 stylings, is an example of their ability to do things only their way, “Toys” with its ethereal backing vocals and overblown grandiosity, before a drum beat from josh Eppard that is capable, surely, of moving mountains, is a real highlight. It is amongst many.

There are 15 songs here – and make no mistake that’s what they are. Each with their own distinct personalities and their own voice. “Black Sunday” is a little like Dream Theater, but it chugs a little more menacingly than Petrucci’s boys, and whereas usually on a concept album, if we’re honest, there are a couple that only exist for the purposes of the “story” that’s not the case here.

“Queen Of The Dark” broods and you know it wants to lay waste to everything it comes across, “Truly Ugly” is a slice of driving hard rock that is going to sound fabulous live, “Love Protocol” is the type of thing that modern bands with lovely haircuts play (post something or other, no doubt) while “The Pavilion (A Long Way Back)” owes its debt to something from the 70s – and as much as I hate to mention Queen on this website – it invokes their spirit, if not their awful tendencies.

There is an electro pulse, as to be expected, about a few of these, and “Night Time Walkers” is an example, and the eerie sounds of “The Gutter” appear to give it an understated quality, but it is typical of Coheed that they confound expectations by turning it into a massive piece of work. One which veers from balladic to monstrously heavy.

“All On Fire” is typical of the interesting approach that they’ve always taken to the music, and “It Walks Among Us” does sound thoroughly dystopian, but it is typical of Sanchez that it has a hook, a chorus, and all the things that other bands forget.

The keyboard work here blends superbly with the guitars and never better on the radio hit in waiting that is “Old Flames”, before the credits roll, as it were (I assume they still do this in films, yeah?) with the fragile, stripped down, acoustic “Lucky Stars”, which may well have tremendous significance to the storyline, but here, just sounds like a beautiful love song to me.

And that is why “The Unheavenly Creatures” is wonderful. Whether you are totally into the concept, the story, the comic, the world it evokes, or a philistine like me, it appeals. Ambitious, incredibly conceived and working on so many levels. There are not many albums like this – and trust Coheed And Cambria to make one.