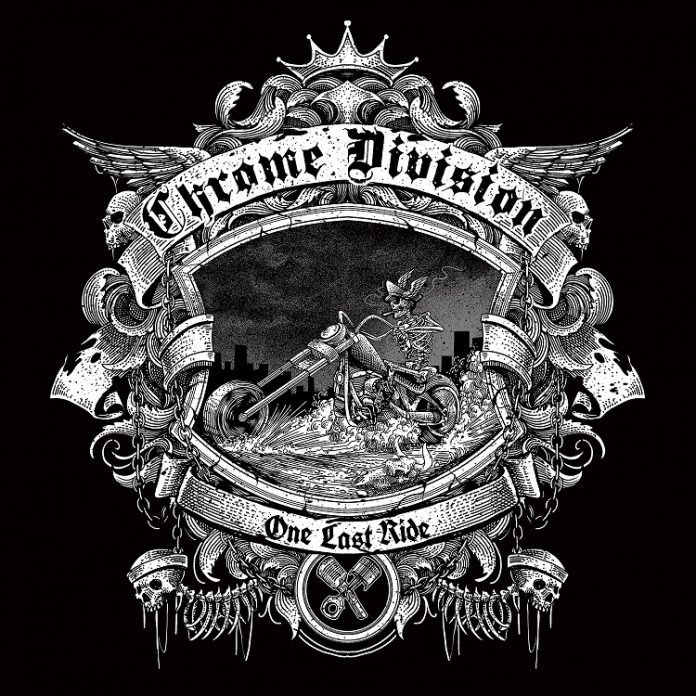 “I like your smile, like your eyes and you know….you got a decent rack….” So goes a line on “So Fragile” – essentially, the first track on “One Last Ride”.

And that, in a filthy nutshell, is Chrome Division.

“One Last Ride” is a special album for the band too. Their fifth, it is also their last, this one sees the boys – and honestly, this is the most testosterone fuelled rock n roll you can imagine – well, ride off into the sunset.

One of the interesting points of this record is that the man singing that line is Eddie Guz, because for the last in their chapter, they’ve brought back their original (and if I’m honest, best) vocalist. These songs need Guz and his gravelly voice.

Somewhere in between the blues and whiskey-soaked rock of Motorhead, and a NWOBHM band, it is entirely disinterested in anything other than fun. And the dirtier the better, if you don’t mind.

If they’re gonna ride hard here, then you’re getting put away wet. “Walk Away In Shame” grooves, my goodness does it groove. Even better, it is given a soul tinge too, believe it or not, thanks to the vocals of pop singer Misssela  – who seems to positively relish the challenge. The thought that this just a record to bang your head and get your horns…urmmm…up to is there throughout “Back In Town!” too. “There’s whiskey in the morning and ladies every night, I’m gonna kick some ass tonight” spits Guz and I am betting that’s what he does too.

“You’re Dead To Me” is a proper slice of sleaze rock. You’ll be reaching for your old Skid Row records as soon as it is done, and the bass here absolutely thunders. But amongst it all, you know, Chrome Division can’t half polish up a chorus.

“The Call” has a touch of Orange Goblin about the riffing, and there’s even a spoken word bit in the middle – granted it says “I love to watch the sun going down in my hometown, its like watching the sweat dripping from a young girl…” but still – while “I’m On Fire Tonight” roars into action.

“Staying Until The End” is proof that any song is made ace when the cowbell rattles, and “This One Is Wild” is probably the best single entendre (there ain’t time for double entendre’s here) stuff since “Look What The Cat Dragged In” by Poison in 1986. Let’s just say the three of them had a great night…..

The title track is made to be played live (by a band who rarely does). Summing up their career, it thanks the fans and their former bandmates, “Ricky Black, stay out of jail…” rather sums it up – and it shows a band that just did this all because it could. And it wanted to.

Bookended with an intro and outro, the last “proper song” as it were, is “We Drink” a good, old fashioned metal gallop and the chorus goes: “it’s the feeling you get when you drink with your friends, and all your problems just fade away.”

Chrome Division were never meant to be more than that, you suspect. They were a vehicle for Shagrath to do something away from being the singer in Dimmu Borgir and play some 80s style hard rock. There are those like me who never cared for Dimmu, but loved Chrome Division and there will be those who don’t “get” this.

Either is just fine. Chrome Division don’t care. They loved making this record and the fun oozes out of every single one of its grubby little pores. As they race off into the sunset, they do so with maybe their best record riding pinion.