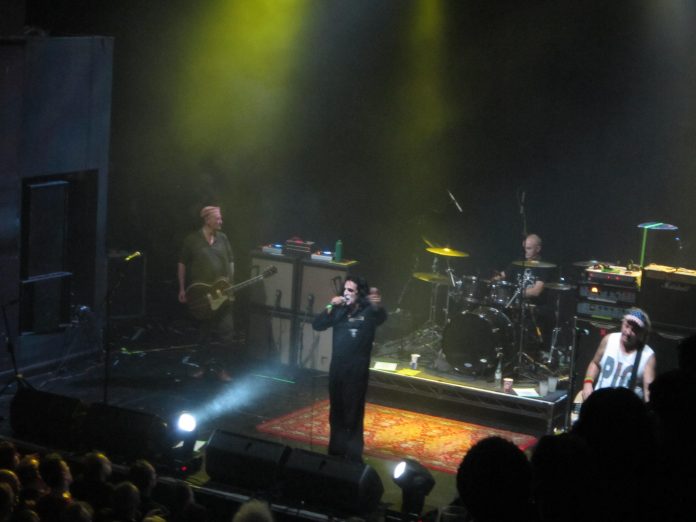 Tonight, Killing Joke`s `Laugh At Your Peril 40th Anniversary World Tour` reaches Birmingham and it`s a packed and edgy audience that awaits their arrival. It`s hard to believe that this post punk, new wave cum industrial rock band were formed in 1978 and harder to believe that I first saw them in 1981. The stage darkens and the original members Jaz Coleman, Kevin “Geordie Walker”, Youth (Martin Glover) and Paul Ferguson hit the stage and open with the wonderfully hypnotic `Unspeakable` as a mosh circle forms and the faithful go crazy. Three out of the next four tracks are from two of the three albums that the fellas have released since reforming in 2008, after the sad passing of former bass player Paul Raven with `European Super State` a real favourite of mine, `Autonomous Zone` and ` New Cold War` The albums “Absolute Dissent”, “MMXII” and “Pylon” proving that the band still produce thought provoking lyrics with a hell of a noise, to challenge their earlier works of art. There is something for everybody this evening with a trip back in time with `Eighties`, `Requiem`, `Bloodsport`, `Butcher` and `Follow The Leaders` as Jaz prowls and stalks the stage menacingly. Killing Joke have always been a political band but Jaz seems to be on a mission tonight with a far few quips before introducing songs and indeed Dick Chaney gets a mention as the boys offer up `Loose Cannon` I have to admit, sadly, that my days at the front with the moshers and slammers are long gone but from my vantage point upstairs I get to appreciate Geordie`s wonderful guitar fret work, Youth`s slapping strumming bass lines and Big Paul`s incredible pounding drums. A real powerhouse trio. This intense show continues with newer numbers before the set is closed out with the wonderfully anthemic `The Wait` and intimidating `Pssyche`

After some raucous encouragement, the boys return for an encore and Jaz takes time to remember local Wolverhampton boy, former bassist Paul Raven and offers up a stunning version of `Love Like Blood` We get `The Death And Resurrection Show` before the band close out this ninety minute set with `Wardance` and another favourite of mine `Pandemonium` with it`s cracking chorus of “I can see tomorrow, I can see the world to come, I can see tomorrow, Hear the pandemonium” The house lights come on and the tension seems to dissipate as all the guys remain on stage thanking the crowd and taking a few photos. It was a much-appreciated gesture as I’ve never seen the band so animated before. Killing Joke gigs aren`t just a gig but an event, a coming together of like-minded people to enjoy an evening being in the presence of a powerful, mesmerising and brooding cacophony of music with intriguing and provoking lyrics. This anniversary tour concludes in a weeks’ time, make sure you catch one of the remaining few shows.