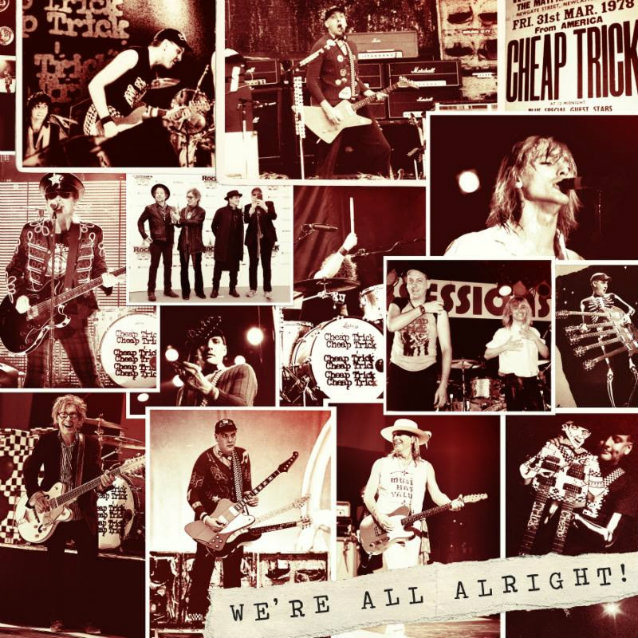 So sings Robin Zander in the second verse of the first single from “We’re All Alright”, “Long Time Comin’”. And whilst we can’t know for sure, it just might be that this feeling was why they released the record so soon after last year’s brilliant “Bang, Zoom, Crazy… Hello” (which was their first for seven long years).

Whatever it means, there is little doubt that the band sound just as invigorated here as they did last time.

The knowing nod in the album title to their classic “Surrender” is a clue to the fact that the wheel is not being reinvented here. Rather this is Cheap Trick doing what they do better than everyone else.

Short at just over half an hour – the maths of this are simple, there are 10 three minute pop nuggets here – and with nothing approaching fat, “….Alright” is everything you could possibly want from the band.

Kicking off with a crunchy little riff, “You Got It Going On” is positively gleeful as it charges out of the blocks. We will assume that everyone concerned understands fully that “…Comin” borrows from The Kinks and just get on with enjoying it, “Nowhere” is as punky as you like – and is anything but the work of men who have been playing this type of music for four decades.

Elsewhere, there is nothing approaching a let up. “Radio Lover” is a bar room stomp, but only after a riotous lock in, “Lolita” adds a tonne of harmony vocals, “Brand New Name On An Old Tattoo” is a real highlight and boasts an effortlessly catchy hook and “Floating Down” is a dreamy psychedelic ballad that works just perfectly.

“She’s Alright” shows that even at this stage of their career Cheap Trick can surprise. Essentially a re-working of Warren Zeavon’s “Warewolves Of London” it boasts the magnificent double entendre “she left just as fast as I came” and everyone keeps a straight face just about.

That said, if its turbo charged Cheap Trick you’re after, “Listen To Me” does the job, while “Rest Of My Life” manages to sound more epic than a song of three and a half minutes should.

The brilliant thing about bands like Cheap Trick is that this far into their career there are no rules, and there is a devil may care attitude throughout “We’re All Alright” and you know what? As long as bands like this are around then maybe we are.