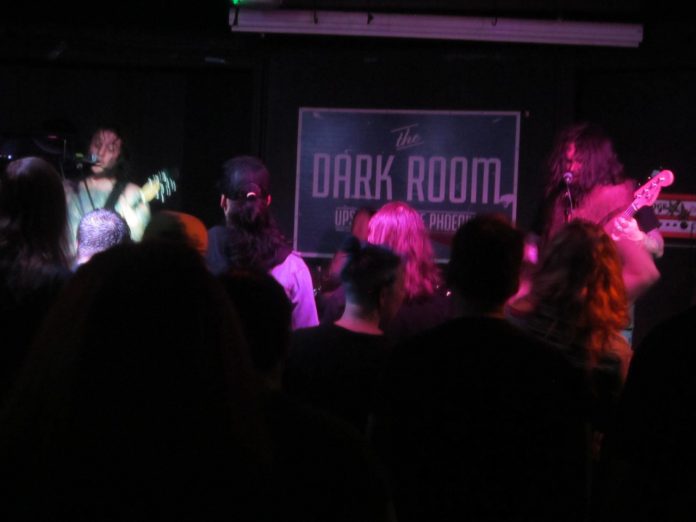 Hailing from Dallas, Texas, Mothership are a heavy rock trio consisting of brothers Kyle Juett on bass/lead vocals, Kelley Juett on guitar/vocals and Judge Smith on drums. I had caught their three albums and really liked what I heard so this was an opportunity to see the boys in an intimate setting, in a venue that I hadn`t yet been to.

The Phoenix was renamed after the emblem of the city’s university in 2011 and was previously known as The Sir Colin Campbell, a famous venue for mainly Punk gigs. A pretty healthy crowd awaited the band as they took to the stage and launched into “Hallucination” from their 2013 debut album.

The aching “Helter Skelter” from new release `High Strangeness` followed before we got “Shanghai Surprise” a song full of AC/DC riffs with it`s lyrics of “Something is wrong here, Something isn’t right, you got me clinging to a sneaking suspicion, Shanghai Surprise” Another track off the new release “Crown Of Lies” a real driving song is shared before Kelley Juett takes over the lead vocals for “Hot Smoke & Heavy Blues” and has the audience screaming “Hey, Hey” and fist pumping the air.

“Eagle Sours” is dedicated to the guys merch man Adrian and they introduce him as The King of Belgium. One of the heavier songs is offered with “Wise Man” a tune that Sabbath would be mightily proud of. A few older tunes “Priestess of the Moon”, “Astromancer” and “Lunar Master” are blasted out before the guys leave us with “Speed Dealer” from their latest release.

I really enjoyed this show, the fellas aren`t worried about sharing their influences with hints of AC/DC, ZZ Top, Black Sabbath and touch of the Southern swagger of Molly Hatchett. But saying that these guys serve up some of the hardest and heaviest rock around, with their own individual style. I`m in and it`s time you got on board the Mothership.