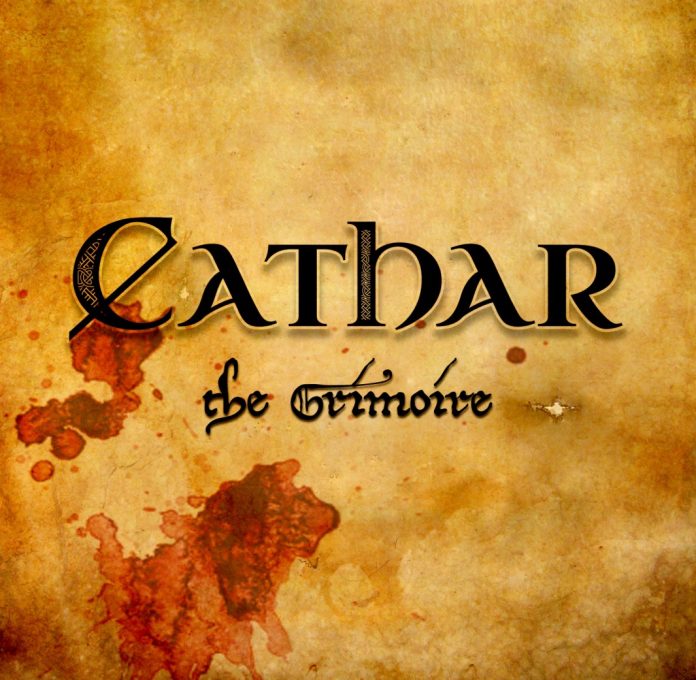 Ambitious symphonic/folk metal crossover from Merseyside. What’s that, it’s got a prologue you say? Count us in!

When a band takes it’s name from an heretical Christian movement (no, MVM didn’t know that – but we know how to use Wikipedia) and names it’s album after an ancient text of magic, you probably aren’t going to find too many covers of “Unskinny Bop” contained therein.

Nonetheless, that’s what Cathar did. And that might give you a clue to the fact that “The Grimoire” is a hugely ambitious collection.

It begins with a prologue, as if trying to let you know that this is storytelling band, and after a strident beginning like that, you only hope that the music backs it up, “Winter’s Curse” most certainly does.

Like the other songs here it features dual male/female vocals from Chris Simpson and Aimee Swift and, but unlike many bands who try this type of stuff, Cathar don’t do the growling man-operatic woman thing, and the album benefits from that.

Musically there is a little bit of everything here. There’s folky bits, there’s some serious metal going on and there is a real over the top power metal angle to songs such as the wonderful “The Pirate King” and there’s even touches of Doom Metal as on the glorious “Shieldmaiden”

The type of record where a spoken word intro and soaring operatic vocals rub along side by side with no problem at all, the closing epic “Spirit Dance” takes guts to pull off but Cathar do it.

Best of all on a really excellent collection, though, is “Carpathia” which seems to get all their widescreen ideas and meld them into a wonderfully exciting package and gives the whole thing a marvellous chorus to go alongside.

The closing epilogue (and you knew there was going to be one, didn’t you?) warns that the ultimate ending is a “tale that must wait for another time.” It promises to be a thriller, if the debut is anything to go by.