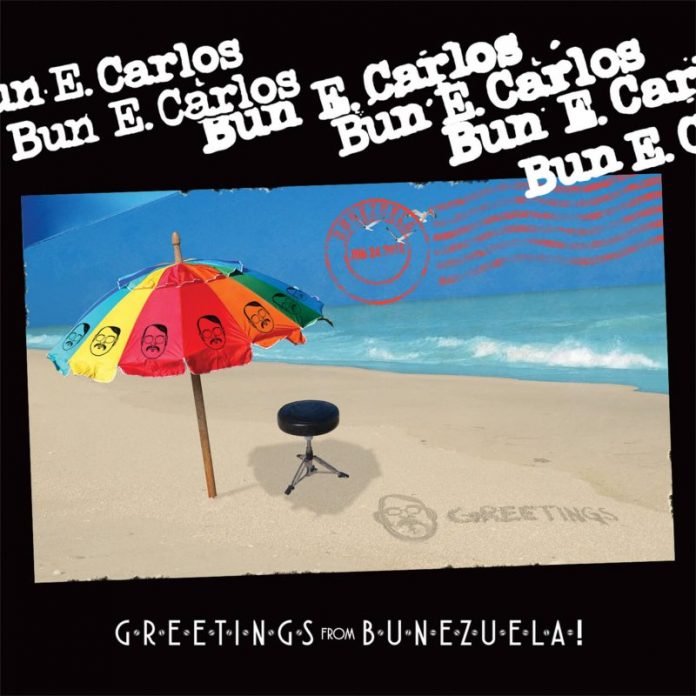 Sometime Cheap Trick man has fun at an open house

The covers album: lets be honest, in the great pantheon of rock n roll albums precisely none of them have ever been covers albums.

On “Greetings From Bunezeula” Cheap Trick Drummer (kinda – its complicated) Bun E Carlos does both – but he does one other thing. He gets an A list class of special guests to help him out, but then he was/is (really, its complicated) in  Cheap Trick for christ’s sake, so he can do whatever he likes really.

So what he did after Cheap Trick were inducted into Rock n Roll Hall Of Fame was make some calls. And blimey the boy was busy, as visitors to Bunezuela include his cohorts in Candy Golde (Rick Rizzo of Eleventh Dream Day, Chicago scene veteran Nicholas Tremulus, John Stirrat of Wilco and Mark Greenberg of the Coctails), Hanson (member Taylor was a colleague from 2009’s Tinted Windows), members of the long-running Monday Night Band and Rick Pemberton, who was in at least one incarnation of the Bun E. Carlos Experience. For vocalists, he reached out to an eclectic set of friends and favourites: Guided by Voices mainstay Robert Pollard, Soul Asylum leader Dave Pirner, Austin icon Alejandro Escovedo, Alex Dezen of the  Damnwells and Xeno, who preceded Robin Zander as the singer of Cheap Trick.

The result is the kind of rock n roll record that sounds like a load of mates having a jam, “Do Something Real” sees Pollard collaborate on the kind of thing that Silver Sun used to do, “Him Or Me” from Paul Rivere And The Raiders reminds us “Mmmbop” actually a genuinely great song as Hanson supply the countrified harmonies here and Pirner’s collaboration on Bob Dylan’s “It Takes A Lot to Laugh, It Takes A Train To Cry” is brilliant.

There are a few that could be given that epithet, “Let The Mystery Be” featuring Xeno, is the kind of blue collar classic that Springsteen tossed out for fun around the turn of the 1980s, and is other appearance is for the shimmering “Count On Me”.

Similarly, the other real highlights largely revolve around Escovedo.  It’s not news that he can make anything sound good, but his go on The Stones’ “Tell Me” is nevertheless superb, as he is on a new version of his own “Slow Down”.

As the garage rock of Them’s “I Can Only Give You Everything” kind of indicates, this is just fun. It’s not going to change anyone’s life, but it might make it better for a little while – and there is nothing wrong with that.