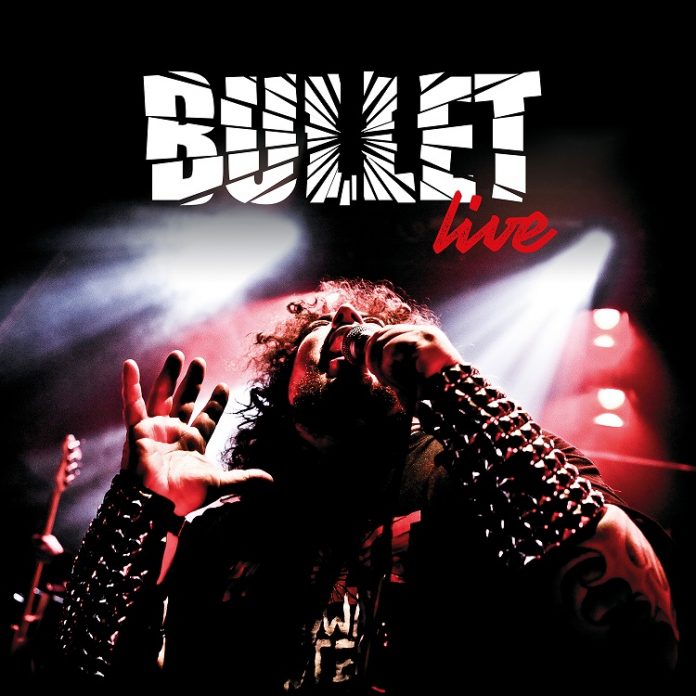 Bullet, “Live” is an album on which Bullet play live. That’s pretty much all you need to know, and this, really, is as no frills as it gets.

On the sleeve of the album, there’s a picture of the bands singer Hell Hofer, backlit and adorned with studs, leather and chains, and that in all honesty, is this record.

There are no frills here, “Storm Of Blades” sees him scream like Rob Halford, as the backing vocals gleefully yell “heavy metal”, and in that context, you probably already know what “Riding High” and “Turn It Up Loud” sound like.

But the key here, essentially, is that as much as you know what it sounds like, then so do Bullet – and Bullet love what they do.

Towards the end of the set, they give it all away. On “Highway Love” Hofer asks the crowd that “Do you think this looks like fun? It’s quite easy to form a rock band” then explains that “girls don’t love fat heavy metal guys, so you have to find a nice one.”

Ask yourself, how can you not love a band like this?

It all sounds like a cross between Priest, Iron Maiden and AC/DC (who they opened for in 2009 and you can see why. They don’t even hide their love for for Angus and the boys: “are you ready for some boogie woogie?” they ask for “Ramblin’ Man and why? Well, probably because Bullet really like all those bands.

That’s why talking about originality is pointless here, because Bullet don’t care. They just want to get the beers in and bang their heads with their mates. There’s literally a song called “Bang Your Head” here, just for that purpose.

A lengthy, two-cd set with a lot of fun packed in, sees “Speed And Attack” do the gallop better than most do, while “Ain’t Enough” proves that for all the messing about here – and Bullet aren’t about to take anything seriously – they are actually a really fine group.

“Rolling Home” actually slows thing down to a speed that isn’t quite “breakneck”, and “Headed For The Top” adds a bit of a sleazy side to things.

Recorded live at three gigs in 2017/2018 this album showcases all their own work, having no covers on view anywhere, and credit to them for that. “Stay Wild” from their 2011 “Highway Pirates” record sees fists in the air and all sorts – and actually – you can imagine this being an Airbourne song.

Heavy metal, though, mostly is at its best when it is casting itself as an outlaw thing. “Rebels Return” does that and does it fabulously, while the set closer, “Bite The Bullet” is prefaced by a simple statement: “This is” offers Hofer – and you can almost hear his grin – “a dirty song, made by a dirty band.” And that’s almost job done.

I’ve never seen Bullet live, but crikey, on this evidence, it sounds likely to be fun.