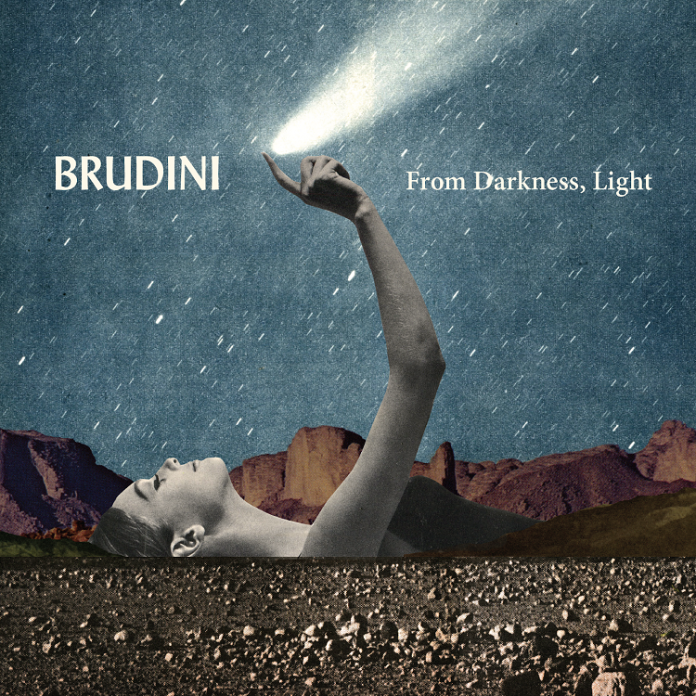 Adopted Londoner Brudini or Erik Brudvik is a unique voice emerging from Soho’s arts scene, an experimental songwriter and musician who grew up amidst the mountains and fjords of Bergen on Norway’s southwest coast, with a Norwegian father and a Thai mother. A sense of not quite fitting in led him to travel to Tokyo, Paris, New York, and eventually London. He has collaborated with Lulu Gainsbourg (son of the French icon) and LGBTQ-pioneer Lanah Pillay, co-starred a sold-out underground Soho alt-cabaret featuring Erasure’s Andy Bell, performed at Tate Britain and headlined London´s 2018 Blogtober Festival. His debut album ‘From Darkness, Light’ is the story of an emotional and spiritual journey. During the five years of its creation, he became a father, his Soho book shop first prospered, then went bankrupt, his long-term relationship ended, and he abandoned his career in finance. The album is a mixture of vocalised poetic offerings supplemented by a variety of music and more straightforward songs. Indeed, Californian beatnik writer Chip Martin has contributed five sonnets to the album.

Amongst the spoken word offerings and opening up this album is `Roselight`, which begins with the microphone being switched on as a piano accompanies a deep spoken narrative of nostalgic longing for times passed. A reminiscence of an event but in an almost detached rather that sentimental way. A wonderfully entrancing piece follows with `Nightcrawler`, a strummed drumline and plucked guitar sets up a platform for vocals that almost bring you into a hypnotic state. The descriptive lyrics relate a tale of a wondering soul to whom nothing matters except themselves who gains a moment of human emotion and connection before being incorporated back into the surrounding night. The delivery ensures that you almost feel you are there on the journey alongside the narrator.

`Hunger` follows and it`s underlying beat ends with almost a church like organ snatch, I can understand the comparisons made with Jim Morrison as the storyline is delivered in a similar manner to some of the cuts on The Door`s “An American Prayer” album. A fable seemingly of unrequited love. The almost jazzy `Reflections` evokes a setting of late-night club drinking sessions, It has a real ethereal feel about it. The piano playing is a joy to behold and this song will remain with you long after hearing it. The reflection is not only of the storyteller not recognising themselves in a mirror but reflecting on how life hasn`t really changed for the better.

In `Female Rimbaud` you can hear the frets as fingers slide across the strings and the tale of looking for a female or androgynous version of the French poet Arthur Rimbaud is sought. The lyrics are a little curious but with the stripped back accompaniment, they work so well. Strange but enticing.

A musically upbeat offering with underlying organ inflections and a resonant drum beat not unlike something The Doors would have submitted follows with `Emotional Outlaw` the lyrics seem to broach the subject of dark and light or day and night and an unhealthy relationship. There are some harmonising backing sighs before a marvellous double bass halfway through competes with the drumbeat and piano synth before the music becomes an ecstatic cacophony of sounds as the artist sings the final lines.

`Pale Gold` has a delightful tuba and trumpet being played throughout this quite vaudevillian piece of prose. Again, the lyrics are quite surreal and once more mention the shadows and the light with Pale Gold being that time seemingly when the sun sets. I read somewhere, that it was described as a soundtrack that is part Spaghetti Western, Balkan and Sicilian mafia funeral, which fits well. A short piece follows with `God Unknown` which opens with a synth echoing in the background. A poetic offering which relates a tale of unreciprocated love and the acceptance of it.

As `God Unknown ` fades it bends into `Radiant Man` To me this is probably the most instantly accessible cut on the album beginning with an acoustic guitar and the singers quite detached vocals before the guitar is joined by a drum being brushed and some keyboard twinklings which really flesh the song out. It relates the story of a person fighting against a tidal wave. In the midst of a crisis, the enduring human spirit emerges to bring people closer. I found the sentiment heartening and the song wonderfully heart breaking. `Ariel` is another brief poetic offering. The descriptive verse is possibly about Ariel, the fourth largest of the twenty-seven known moons of Uranus.  A haunting synth sound throughout the piece adds to its otherworldliness.

`Everything Is Movement` is an inimitable piece. An evocative piano sets the tone for this quite melancholic elegy. It begins quite starkly with the piano which is then besieged by other forms of noise and the vocal almost fighting for its right to be heard at times. Just over the halfway point it takes a shift in direction and almost becomes a seventies disco funk offering with pounding drums, high hats, synth snatches and a thumping bass line and the vocals now riding atop on the crest of this wave. Odd but compelling. The album closes out with the sparse `Boulevards` and it`s a momentary piece of brilliance to end on. It has acoustic guitar, where you can hear the frets as they`re played and an eerie synth shimmer throughout. I was reminded of David Bowie`s `Space Oddity` in a way. It`s possibly about being a detached life observer but not feeling desolate.

This was a superbly unconventional but highly original body of work. It covers subjects such as loss, solipsism, unreciprocated love, self-doubt, longed for relationships, feelings of exclusion, displacement and reminiscence. At times, the music is stark and haunting, offbeat, quirky, experimental, avant-garde, surreal but most of all novel, probing, emotive and Innovative. This bohemian singer/songwriter creates an intellectual hypothetical world that he has allowed us to share. Like a work of art, it should be cherished.