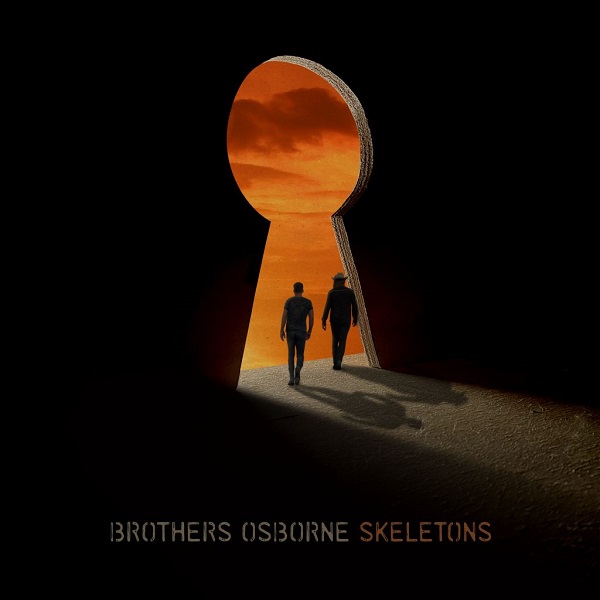 I know I’ve said this before, but that doesn’t make it any less true, there’s little more pointless – usually – than band interviews around the time of new records (perhaps ones with football managers post game?). I’ll swear that somewhere there’s bound to be one with Axl Rose saying “Chinese Democracy is the best thing we’ve ever done, the thing I am most proud of.”

It’s not their fault, of course, who’s going to say: “to be honest, it’s a bit of a Hammock, strong at the top and the bottom and sags in the middle like a beer belly?”

But I did have to smile when I read this from John of Brothers Osborne about “Skeletons”. “If Pawn Shop was our introduction, and Port Saint Joe was like the first conversation we had with someone over a beer, then Skeletons is the moment where you start getting down to the real stuff and showing who you really are,” he said. “If you really want to get to know us, this is the record to do it.”

So you get cynical, you get jaded – even when you like the band – and go, “yeah, alright mate”- Thing is though, when it comes to “Skeletons”, the boy is bang on. It is an absolute cracker and it is different to what they’ve done before.

There’s something dirtier and grimier, more working class, more down home and downright rock n roll about it than ever before. The choruses are still huge and ready for any radio you want to put them on, from Planet Rock to Country Hits, but they are just a little more sure of themselves.

“Lighten Up” is one of a few that deal – implicitly at least – with the current world situation, but there’s an even easier litmus test. Simply put “All Night” on. Rock n roll meets country, meets pop music head on, and if you like this, these are your boys.

Working with usual producer Jay Joyce and their host of collaborators, John And TJ have found some of ZZ Top’s southern rock swagger, on “All The Good Ones Are.” Frankly, Black Stone Cherry fans need to get themselves on this one.

There is (as there always is with the Brothers) some really clever songwriting here. “I’m like B-side Townes Van Zandt” offers TJ on “I’m Not For Everyone” and tongues are firmly in cheeks throughout this.

The title track builds, with something of an unstoppable force. And “Back On The Bottle” wraps TJ’s Waylon Jennings style voice over what is going to become an anthem for any bloke that knows its her fault that he’s been dumped anyway, likewise, “High Note” perhaps the most pop ballad here, is a break up song unlike many others.

Like many my age (about a decade older than the Brothers here) I grew up watching Dukes Of Hazard on a Saturday night. I am entirely convinced that’s why I love country music, and “Muskrat Greene” could have come right off one of the car chases there. The one it leads into, “Dead Man’s Curve”, is essentially “The Devil Went Down To Georgia” rewritten and that’s just fine.

“Make It A Good One” is like their reminder to the world, and “Hatin’ Someone” is very much a gentle statement that just because we don’t agree, we don’t have to hate each other, and maybe that’s a decent thing to take away from this.

The last one “Old Man’s Boots” surely comes from the heart, and even if its not, who cares, it’s a superb, classic country song. And that’s what sets Brothers Osborne apart this time. At a time when much country is more top 40 than Honky Tonk, they’ve gone the other way, and on “Skeletons” they have found their true voices.