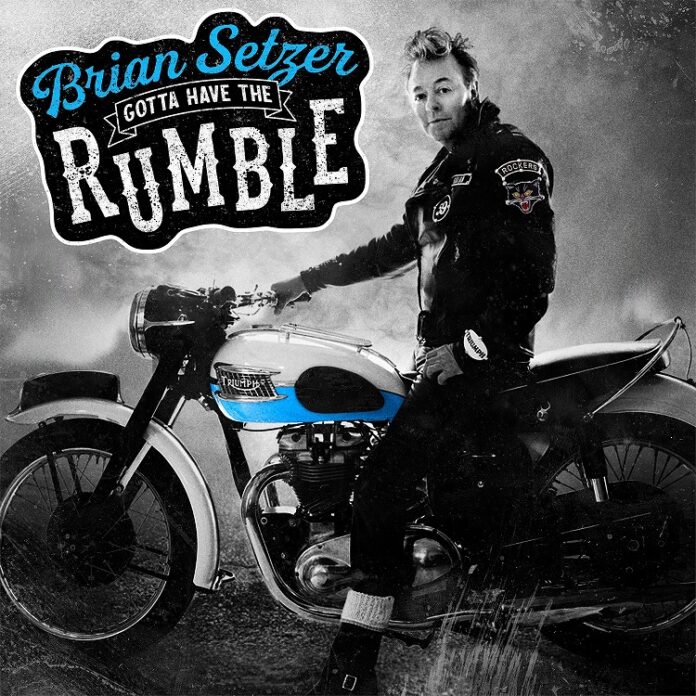 There are – and this is meant as no disrespect to anyone – certain records that you get to review and you kind of know what you’re going to say.

This is generally because you know what you’re dealing with, and generally that means that you are dealing with an icon. Someone who, lets say, has “lived a life”. Your AC/DC’s, your Motorhead’s, your Maiden’s, your Stones’ thats where I am going. ZZ Top too, the biggest, the best, the defining bands in rock n roll.

Brian Setzer can be added to that list, because make no mistake, with his Stray Cats, his solo work and everything else he’s done, this sound – his sound – is ingrained within him.

He even says it himself:  “Obviously, it’s a reference to my motorcycles and hot rods, something that hasn’t changed since I was 15 years old,” he says of the title of the record (his first for seven years). He’s talking about the cover, but he could just as well be talking about the music.

“Checkered Flag” is more than an opener here, more than a salvo, it’s a way of life, its rock n roll writ large. “looking like the cover of a hotrod mag, baby’s wrapped up in a checkered flag”. Now, not being remotely a car person I have no idea what’s in a “hotrod mag”, but I’m damn sure Brian Setzer subscribes to them all. He’s more rock n roll than me. Or you.

“Smash Up On Highway One” (maybe because you were driving the hotrod too fast, I think we should be told) adds a Latin flavour, like its desperate to be headed to Mexico to wreak havoc, and if that’s just one of the (slight) left turns that this record takes, then that’s not the case with “Stack My Money.” As glorious as rock n roll, as rockabilly ever gets, it could just as easily have been on one of those Elvis films in the 50s as it is in 2021.  And thats just as true of the more primal rumble of “The Wrong Side Of The Tracks” too, its impossible not to think of the “day job” as the bass bubbles.

All these are either written or co-written by Setzer, and the one he did on his own, as it were is the sweet and innocent “Drip-Drop”. To listen to it is to be transported back to an age that probably only existed in films like Grease, but it is just lovely.

“The Cat With Nine Wives” on the other hand is wonderfully absurd and actually genuinely funny, “Turn You On, Turn Me On” gets bonus points for using the phrase “shake n bake” for perhaps the only time in recorded history, and that’s before we get involved in the whole Freudian thing, and the barmy impression “Ballroom Blitz”. Fabulous isn’t even close.

“Rockabilly Riot” on the other hand is nothing more and nothing less than a summation of everything that Setzer has ever done, a thought that “Off Your Rocker” likes so much that it essentially repeats the dose. Indeed, there’s an element to that about the whole of this. “One Bad Habit” oozes naughtiness, but still manages to rhyme “binge on TV” with “decaffeinated tea” and to be honest, I can’t top that. Neither could you. You and I aren’t Brian Setzer, that’s why.

But here’s the thing. When I first saw Brian Setzer, he’d have been playing “Stray Cat Strut” or “Rumble In Brighton” or something on Top Of The Pops. I’d have been about six years old. He was cool then, he’s still cool now, and he’s still, quite frankly, up for the fight: “Gotta Have The Rumble” proves that brilliantly.