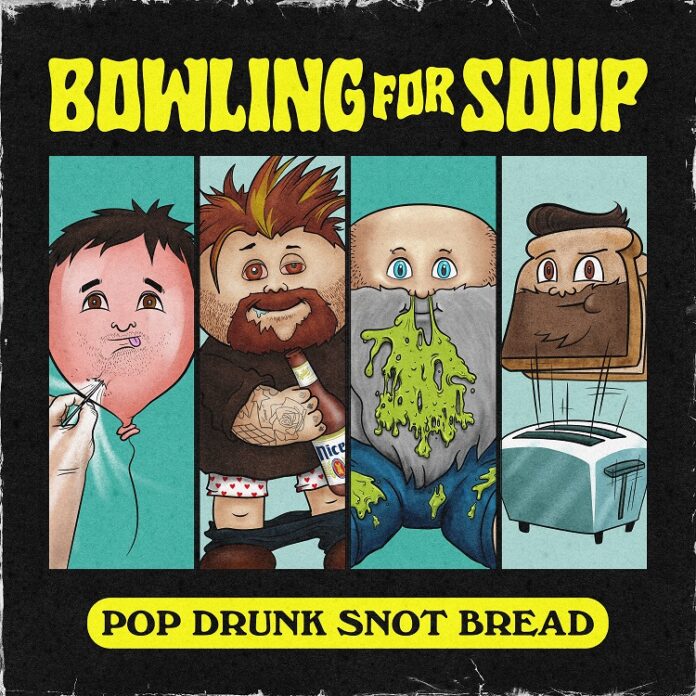 Whether you relate to the next 700 or so words will rather depend on whether you understand the words “What the fuck is Tik Tok?” That’s my contention anyway, and I’ll explain.

“Pop Drunk Snot Bread” is the 11th studio record that Bowling For Soup have released.  I have heard (before this one) precisely one of the others. 2002’s “Drunk Enough To Dance” was a big favourite of a friend of mine back then, who handed me a CDR of it. She’s also the reason I like Nickelback too, so maybe I should have listened to her.

It was Easter weekend and had nothing much else to do. BFS were playing Birmingham’s Academy, and as happens when you run a music website, you get offered tickets to review the show. Full disclosure – and their PR chap will back me up – I said “look mate, I am not a massive fan, I know the hits, but I am happy to go. “

So, this is the bit where I am supposed to say that they blew me away and (with it being Easter and all) I went off on a Road To Damascus style journey. Yes and no. Look, the gig was fun at the time and they did do the hits, but something else happened the next day.

Maybe its just me,  but you know how often enjoy gigs more in retrospect? This was one of those times. Because, literally it was when writing the review the next day when I “got” BFS – and its on that line about Tik Tok.

See, Jaret Reddick is roughly my age (indeed on stage that night he’d opined that he “was too old to be singing about High School”) but instead of growing up like you’re supposed to Reddick and the rest of the band merely make music that speaks to their audience. Not “down with the kids” but recognising that even in middle age, there’s no absolute imperative that mandates maturity.

That’s the vibe all over these 15 songs, “Greatest Of All Time” is both tongue in cheek, but utterly steadfast and confident that its brilliant. It’s “I Wanna Be Brad Pitt” though that convinces you. A little like those brilliant English singer/songwriters, Chas And Dave, the beauty is in the simplicity, but its cleverer than it seems.

“Hello Anxiety” takes a serious subject and makes it relatable (and if we haven’t discussed the catchiness of these songs yet then can we just assume that you’ll find it easier to flush a Boxing Day poo than get rid of them out of your head)  “Getting Old Sucks (But Everyone Is Doing It)” is not just the one with the “…Tik Tok” lyric, but so utterly glorious that you can’t resist the thing.

There’s balladry. “The Best We Can” is sweet and acoustic led, but they just change gear so the chugging ones hit harder. “Alexa Bliss” is pretty much a love letter to the wrestler (that’s cool if I was in a band most of my songs would be about Kylie) and even if “Burn Out” is darker and we can all debate who it might be about, then it sounds like a sugar rush as if being bitter wouldn’t quite suit them.

“June Carter Cash (Lost And Found)” is power pop done right. Butch Walker (who co-wrote “Girl All The Bad Guys Want” would be proud of the thing, “Killing Em With Kindness” might be something we all need to think about now that Elon Musk has brought Twitter, “Wouldn’t Change A Thing” reflects on life since they released “1985” and concludes that life isn’t bad after all – although in typical style it does reason that “maybe I should have learned a second language or bought stock in Apple /Sold everything that I own/ Bet it all on the Steelers in the 09 Super Bowl. Fair point.

“The Letter 3 (The Sitcom Song)” has some glorious harmonies to go with the serious message, and the last song “After All These Years” addresses Reddick’s relationship with Chris Burney – the man who has played guitar with him for 30 years and explains that: “You’re the only dude I know that doesn’t like Tom Petty, But I still roll with you I just don’t let it get me, even though I think your wrong, that’s why I write the fucking songs.”

In addition there’s a couple of interludes where a Morgan Freeman soundalike gives you the chance for a pee break and then later explains that however bad you’re feeling you’re important.

Which is kind of important, after all, and if any two lines sum up “Pop Drunk Snot Bread” – and my last 10 days with the band, its these from the opening song:

“We only want to make you smile/Maybe sing along and forget about the bad stuff” sings Reddick – and in honesty, what’s wrong with that sometimes? Clever, catchy, and wonderfully done. I am going to assume that all Bowling for Soup albums are this good, but whatever, this one is brilliant. And whatever pop punk is, it’s not dead. It’s getting older and on this evidence, couldn’t care less.