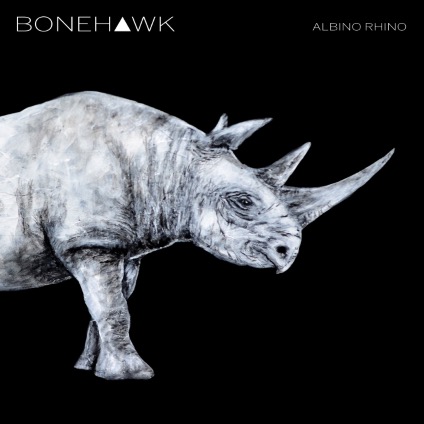 Years in the planning, and worth it too

Consider this sentence if you will: [they] envisioned combining Iron Maiden and Thin Lizzy-esque harmonies with the straight-up grooves of Sabbath, Led Zeppelin and the twin guitar assault of Judas Priest and Kiss.

The subtext of this is pretty simple: yeah, we are gonna sound like all the best bands in the world. If you fancy a listen do join us, won’t you?

The piece of prose in question comes from the press pack that arrived with “Albino Rhino” the brilliantly titled debut record from Michigan’s Bonehawk. The bit about Maiden and Thin Lizzy, to be honest, was all that was needed to get this listened to, that it is exceptional is what is about to get it a gushing review.

It could have all gone wrong, as MV doesn’t like bands saying they sound like Thin Lizzy when they don’t. It’s a good job for them, then that “Desert Run” a track towards the end, contains an into that knows its debt to Scott Gorham. And, as much as we adore the original MV doesn’t like Iron Maiden copyists, so it’s an even better job than that whilst “Albino Rhino” isn’t some trad metal pastiche, although Bonehawk do clearly know their way around the work of the early 1980s.

The “they” in the opening sentence are singer/guitarist Matt Helt, and guitarist Chad Houts. The pair met in school in the marvellously named Kalamazoo (and by the way, why are are American place names cooler than ours?) and set out their dreams – and my, with “…..Rhino” how they’ve managed it.

The groove is king here. Great, mighty swathes of Pepper Keenan like guitar greet “Argenia”, “Sexy Beast” does the same, but with a thumping intro before settling for something slightly more monolithic and there’s a warm, 1970s fuzzy quality all over the brilliant “Hot Mary”.

With all due respect to Mary – and her hotness – though, it and everything else on the record for that matter, has to bow down to the astonishing “Tonight We Ride”. It’s got everything required to make a song great – including cowbell and a chorus so simple and catchy that you’ll have it in your head for days.

The cowbell is back for the bass heavy “Ulysses” and any song that starts with “rescind the orders that you’re leaving the earth” kinda demands attention, doesn’t it? While “Nomad” is more than comfortable with its smoky Sabbath type riff.

The fuzzed up classic rock filled “Going Over The High Side” allows the band explore to wonderful effect and the twin guitars here are a joy to behold. Clearly warming to this theme, the record ends with a full eight minute instrumental, and if you’d suspected throughout that Bonehawk would turn into a full on jam band given half the chance, then this is your proof.

A phenomenal debut statement, and one you imagine the old friends are thrilled with. “Albino Rhino” did emerge in 2014 as a limited vinyl. It’s out now on that doyen of good taste, Ripple Music”. It deserves a worldwide release. If you didn’t get it before, get it now. If you did, get it again.