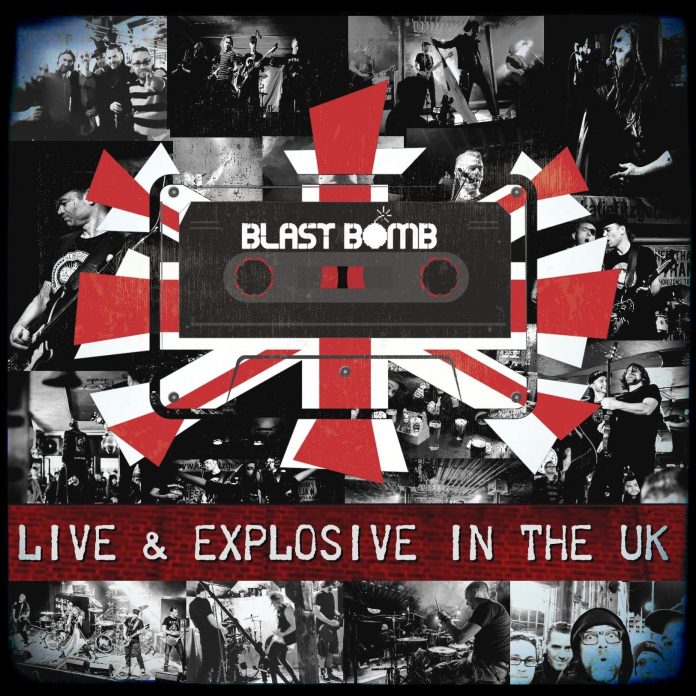 I love albums that are recorded in odd places. It comes from The Friday Rock show, I am sure of it. I remember listening to Tommy Vance on the little radio I had as a boy, and Kiss were playing live. “Good evening, Ipswich!” chirruped as only Paul Stanley could when they played a gig at the football ground, is something I have never forgotten (and every time we ever went to watch our team at Portman Road I bored my brother with that story too).

A few years ago I went to watch a gig and the German Power Metal band I was watching merrily announced: “We played Grimsby last night, let’s see if you are louder….”, which popped into my head when I was listening to another German band in Blast Bomb.

This one “Live And Explosive In The UK” was recorded a couple of weeks before Covid-19, in Redditch. A Worcestershire town that I used to work in, as it happens, but for frontman Johnny it has a lot more significance than that. This is a hometown and homecoming show. And the passion with which it was delivered is absolutely palpable here.

Johnny has form. He was the singer in the superb Midlanders Thirteen Shots before moving to mainland Europe. This is rougher, readier if you like, but those who love bands like The Professionals or any of the Swedish punk n roll bands from the late 90s, will find much to love.

“Rock N Roll Junkie” the lead track here, actually seems to sum things up, because this is the work of just that. You can boil it all down, but it all comes down to blokes who do what they love and love what they do. Torben and Klaus on guitars sound like they were born to do it, and the bass of “Gambler” has a touch of Motorhead about it, as it rumbles with filthy intent.

This is punk that would like to take you down the nearest dark alley and give you a kicking, “Born to Lose”, “Outta My Mind” aren’t found wanting in the muscular stakes that’s for sure, and “Burn History” isn’t far from metal.

“Maiden Hero” ends the set, and does so with a real skill. This is a show that deserved an encore, though, and gets one with a raucous and sneering “Game Over” and the way the chorus explodes shows you pretty much exactly why Life Of  Agony invited the band to play with them in Hamburg.

I began with a radio show reference. I’ll end with a podcast one – that’s just modern radio anyway, right? – I was listening to Sammy Hagar the other day get good and grumpy about the fact that Van Halen’s “Live Right Here Right Now” record wasn’t live at all. “There was so much done in the studio,” he said, “that all that was left was the cheering.” This has way more integrity. More reality – and is all the better for it.

Even better, “Live And Explosive In The UK” meant so much more.