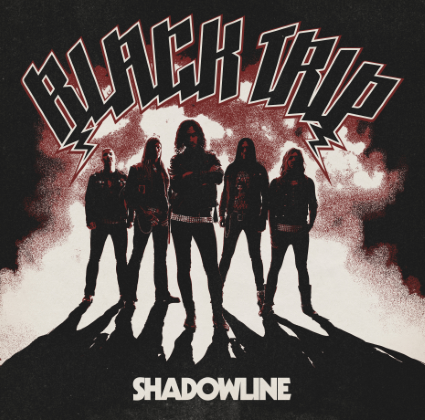 Take some black metal bods, a couple of members of Entombed a pair of Enforcer chaps, add some Nicke Andersson and you might just have the recipe one of the classic rock records of the year

For their second record, Black Trip decided that more of the same would do. Only better. You see, back in 2014 the guys – made up of what amounts to some extreme metal royalty, plus the singer and drummer from Swedish speed metal revivalists Enforcer, released with a mighty fine debut.

Critical acclaim followed, and so did the question of just how you follow a record this good up. The answer, as it turns out, is pretty unequivocal: “You leave it to us to worry about, matey. We’ve got a stone cold piece of brilliance up our sleeves.” They (possibly) said.

And it’s no exaggeration to call it brilliant either. Because right from the start of “Die With Me” – which sees Joseph Tholl let out an exultant scream – it’s as if the band simply cannot wait to get cracking with album number two.

“…..Me,” as a calling card goes, is a pretty accurate summation of the record. It has all the hallmarks of everything that has ever been great about hard rock and metal. If you have ever been waiting for a band that blended Saxon with Thin Lizzy then, brother, you’ve found them.

Actually, on the wonderful “Danger” they just turn up with a full on Lizzy thing. And if (obviously) the Black Star Riders are the kings if this type of sound, then Black Trip aren’t far from the heirs to the throne.

A magnificent record, it’s title track adds some darker imagery to its early Def Leppard-ish grooves and while the sound of Biff Byford’s venerable old gods jamming with UFO is all over “Berlin Model 32.” “Shadowline” is an album that is totally unafraid an unashamed of its influences, “Clockworks” for example, is shot through with the type of youthful, leather trousered enthusiasm that only the first two Iron Maiden albums have ever mustered.

The record was made at Nicke Andersson’s studio, and while clearly his stamp is all over it, this is never more evident than on “Subvisual Sleep” a stomping affair that could have been lifted straight from a Hellacopters album.

On its longest song, “The Storm” Black Trip manage to nail an epic sound, but there’s time for one last twin guitar riff to close things, and “Coming Home” is a fitting way to end this record, as Tholl screams with glee “I’m coming home tonight….” in such a manner that suggests you had better steer clear of him unless you want a party.

A quite brilliant collection, and one which you suspect everyone concerned absolutely thoroughly enjoyed making. The highest compliment you can pay Black Trip is this: last week would have been Phil Lynott’s birthday. Had the god-like frontman still been alive then he might just have been gratified that there’s people out there still making classic rock this good.

As Ricky Warwick – one time singer in the best re-incarnation of Thin Lizzy and now the man in Black Star Riders – is fond of saying when he plays “Cowboy Song”, “Phil is still riding with us on this rodeo.”

And ain’t it just great.

Previous article
Kurb-d Your Enthusiasm
Next article
Yet More War