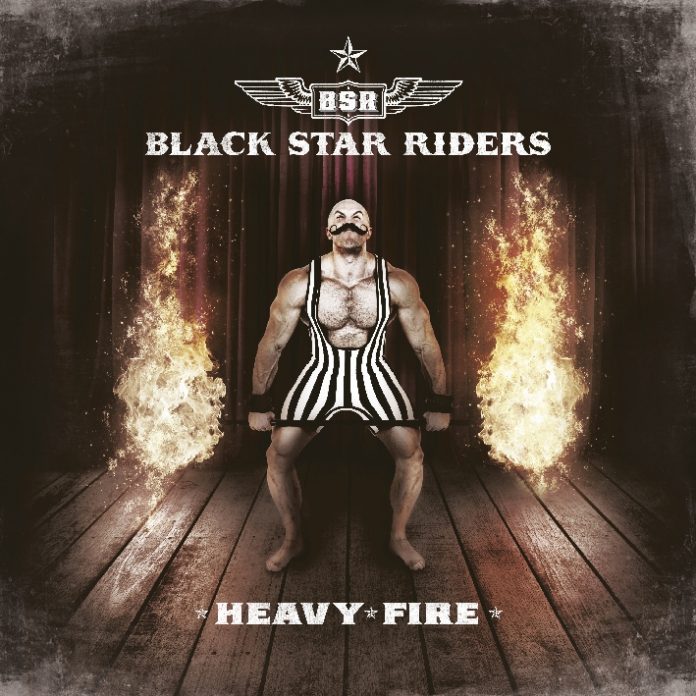 A bright future while embracing the past

It’s the 30th May 2013, and MV is crammed, together with 300 or so others, into the Marshall Amps Studio near Milton Keynes. It’s the first gig from Black Star Riders and singer Ricky Warwick says this to the crowd: “All we want to do is keep the spirit of Thin Lizzy alive and play two hundred plus shows a year….”

In the last four years, they’ve done all that and more. “Heavy Fire” is their third record since then, they’ve never been off the gig scene and the first part of that sentence – the Thin Lizzy part – is always going to be taken care of simply because three of these men were in the last incarnation of the band and one of them, well, one of them is Scott Gorham.

But, whilst everyone – including the band – knows the history, it is a fact that BSR have always been a band that looked to the future while embracing their past. In that context “Heavy Fire” is merely a continuation of the evolution that they began in 2012 when they decided that the new songs they’d got in the bag were not songs for a new Thin Lizzy album at all, but a new band (a decision that was as right then as it is now).

It is also fair to say that “…Fire” is their most consistent record yet.

Ten songs, no flab and very little filler. Recording again with Nick Raskulinecz (Foo Fighters, Rush) this time they’ve honed their sound – and in doing so have moved a little further away from that Thin Lizzy sound then they had before.

That’s not say it has gone completely. Let’s be honest, any hard rock band that doesn’t have an element of the greatest hard rock band of all time is doing it wrong. To that end “Dancing With The Wrong Girl” and “Testify Or Say Goodbye” are very much what you’d guess what Lizzy would sound like were they still around. The former has a line: “I will admit it, I was four sheets to the wind, but to break your heart was clearly not my intention” which couldn’t be more Phil Lynott if it tried, and the latter does that guitar harmony thing in a way that only Gorham can.

Elsewhere though, “Heavy Fire” sees the band stretch themselves into making a brilliantly fresh – and just brilliant – record.  The title track, which kicks things off with a guitar solo no less, will strike a chord with those who loved Warwick’s first band The Almighty in their “Just Add Life” mid-90s days. “Who Rides The Tiger” is another that owes more to that stuff than the previous Riders work.

Saying that, however, there is nothing here that is too much of a departure, but it does a Ricky Warwick stamp on it. “When The Night Comes In” is probably the highlight here, and is the type of thing that he does on his wonderful solo records but is yet more proof that he and guitarist Damon Johnson – the other of the trio of ex- Lizzy men – have a really special musical bond. “Cold War Love” is more understated, but no less impressive as they enter a more troubadour like mode.

There are songs here that push the envelope. “Thinking About You Could Get Me Killed” sees bass man Robbie Crane to the fore and there’s frisson of funkiness in the riff for “True Blue Kid” which is almost as if they know they’ve found their sound and will happily investigate its outer edges.

“Ticket To Rise” is one of a number that uses soul-filled backing vocals and comes in with a slammer of a chorus, and the conclusion to the collection is a heads-down rock’n’ roller and “Letting Go Me Of Me” seems to suggest that there’s plenty of mileage left in this journey.

The almost constant activity shows a band that is old school in their work ethic perhaps, but “Heavy Fire” is absolutely the sound of a band that is not just looking to the future, but cementing a legacy all of their own.