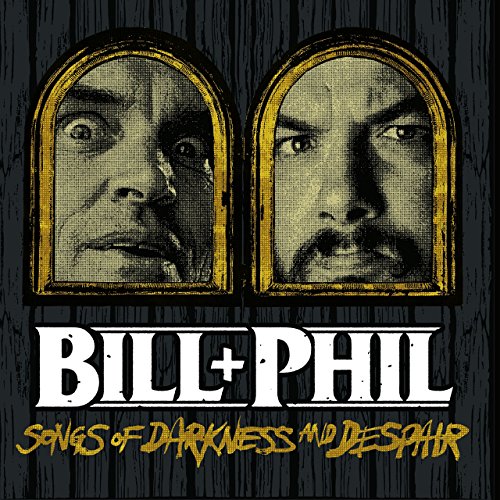 The irresistible force of metal legend Phil Anselmo collides with the immovable object of horror icon Bill Moseley in a joint project that puts the cult back into the Occult.

In a world where weirdness is the norm this will certainly be one of the strangest releases in 2017, but it may also prove to be one of the best. It has dark, heavy rock vibe alongside an occult melancholy that allows for five tracks of a varying structure, dark humour and atmosphere that consistently challenges and thrills. Take “Tonight’s The Night We Die” for example. It’s the penultimate song in on the record and its title would suggest a furious assault on the senses but instead it’s a largely straight forward acoustic lament that allows Moseley’s visual lyrical style to come to the fore.

What comes before, however, is far from straight forward, even taking into account the overall stripped down feel of the music. The crawling riff of the opener “Dirty Eye” sets the tempo with a familiar southern rock sludge that has long been Anselmo’s hallmark. It immediately puts the listener at an uneasy ease and ready to take the trip, wherever that may lead.

As it would turn out it leads into the magnificent “Corpus Crispy”. Lyrically it sounds like Jim Morrison has taken too much acid and is tripping on a California beach whilst the rest of The Doors decide to get a little more gritty and ethereal in their sound. Clocking in a seven minutes it is by far the longest and most obscure track on the album. And it’s all the better for it.

Both protagonists are no strangers to collaborations with Moseley having joined forces with Buckethead for a ‘Cornbugs’ project which was as delightfully twisted as it sounds. He has also contributed voice over work for bands such as Generichrist and Sinnergod.

No need for a full resume of Anselmo’s musical contributions as he has been responsible for some of the heaviest and best music around for the past twenty years or more be it with Pantera, Down or Superjoint to name but a few.

Most critics are usually very wary of collaborations, especially if well-known actors are on board. Despite not being one of the Hollywood elite it is fair to say that the horror-themed acting of Bill Moseley has brought him much praise and adulation, even if it is in the halls of horror fan conventions rather than tinseltown’s red carpet.

The album’s lyrics, mainly provided by Moseley’s pen, match the bruising tones and simmer undertones of the music perfectly and rounding out the band’s sound is Superjoint guitarist Kevin Bond along with teammate José “Blue” Gonzalez on percussion and King Parrot’s Squizzy Squires on bass and guitar.

“Widder Woman” is a 30 second interlude of insanity that would make Frank Zappa look vaguely normal. No easy task.

“Bad Donut” finishes the album off and is a two-minute spoken word diatribe against mankind, and parents in-particular, and is driven by a distorted series of spiralling riffs that would twist of into the ether were they not restrained somewhat by the rhythm section.

Anselmo’s suggests that this collaboration will be far from a one-off and that more musical morsels will be in the offing over the course of time. In a year that has been pretty brutal on musical legends it is reassuring that some legends just keep on writing new chapters.

Songs of Darkness and Despair is out on Friday 20th January 2017 via Housecore Records. Pre-order here