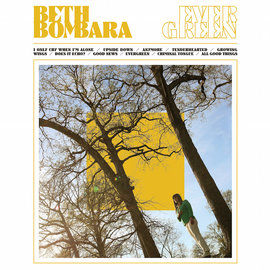 I’ve never been to the Rocky Mountains, but I can well imagine it working as a muse for any singer-songwriter looking for a cathartic experience. That’s been the case for many – and if not the Rocky’s then the seclusion of a log cabin has helped many an album over the years.

Just recently, the likes of Jason Ringenberg and Stephen Fearing have shut themselves off from the outside world to make new music. Beth Bombara did the same. The name of her Log Cabin even gave this album its name. She’d retreated to Evergreen to clear her head after a tour and came away with this collection of songs.

Whatever inspiration she found in the hills, seems to have come from a sadness. Both personally and at the wider world in 2019. The former is all over the lead track “Only Cry When I Am Alone”. Concerning itself with the face you present to the wider world, it recalls the superb Jade Jackson record of a couple of months ago and is a mighty slice of country tinged rock n roll.

“Upsidedown” is cut from the same cloth. In truth many of them are, but there seems to be a determination in its lyrics. “Leave behind your couldabeens” she sings in the chorus, and in many ways that is a signpost, perhaps of the album. There’s things to change and she’ll change them.

Bombara has an excellent voice and that is to the fore on the Lap Steel drenched “Anymore” and if there are a few on here with a genuine crossover potential, then this is the one.

“Tenderhearted” has a Springsteen thing going on. And the all-or-nothing flavour, of “Evergreen” in general is shown by the idea that we’ve “turned our back on the back up plan”, but more than that it is proof that for “Evergreen” she has surrounded herself with a fine band. Calvin Abney’s keys elevate that one, but also the darkly country “Does It Echo”, and in between, the lovely ballad “Growing Wings” is classily done.

“Good News” kicks off with a low-slung, Rolling Stones style riff, but there’s a funky, bluesy flavour too and it stands as one of the best on the album. The title track changes tack again. Not quite Wall Of Sound in the grand tradition, but more 70’s sounding certainly.

“Criminal Tongue” is more pulsing, and the harmonies are yet another subtle left turn on a record of many. That includes the last one too. “All Good Things” is just Bombara and a piano, and seems to me to be a bit of a State Of The Union address. “If this is great again,” she offers, “then where did we begin?”

It’s an interesting question to end an interesting record. The mountain air clearly agreed with Beth Bombara and in “Evergreen” she has made a record to stand the test of time.