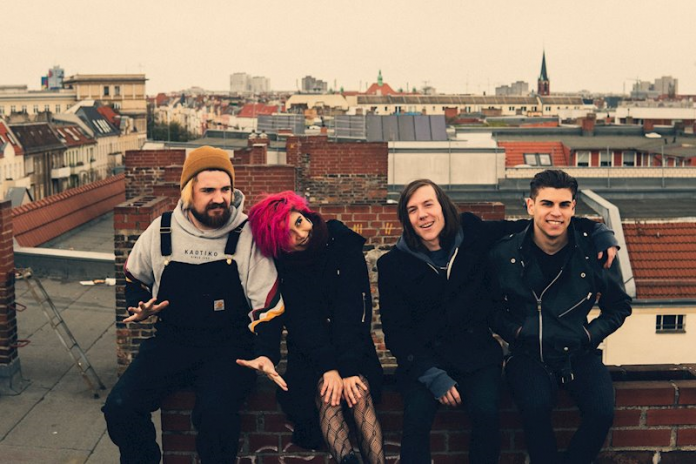 Berlin fuzzed-up alt-rockers CAUSTIC MINDS plan to break out to the UK with the release of their mesmerising new EP, Black Oil For A Soul, which is out now via all streaming sites. This mouth-watering EP takes from everyone from Black Sabbath and The Kills, to The Dead Weather and Arctic Monkeys.

Initially formed in 2017 in Berlin, Germany, CAUSTIC MINDS have formed an engrossing sound that mixes gritty indie rock with hard rock, and the end result delivers powerful riffs and edgy phrasing with sharp lyrics. Although the band are Berlin-based, they have a true international flavour: Daniel Viseras Calvache (Guitarist) hails from Granada, Spain, Michiel Sybers (Bass) was born in Antwerpen, Belgium, Chris Crabtree (Drums) is British/German, and Laura Jiménez Alvarez (Singer) comes from Mexico City.Since their arrival on the scene, the foursome have earned a reputation for delivering highly energetic shows; such praise has seen the band undertake a series of successful shows throughout the whole of Germany.

CAUSTIC MINDS now continue their climb with the release of their new EP, Black Oil For A Soul. Guitarist Daniel Viseras Calvache remarks about the release: “Recordings were as intense as you would expect from a band of unemployed kids. ‘Black Oil for a Soul’ includes the loud voices that you wanna hear from a starting band, with the subtlety of young musicians with a will to grow and create music.”

CAUSTIC MINDS will play numerous shows throughout the Summer; stay tuned to their social sites for updates.