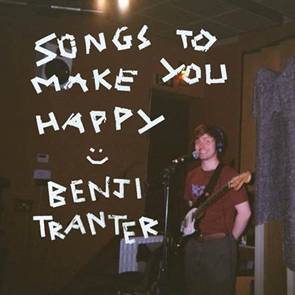 Welsh singer / songwriter Benji Tranter releases his debut album `Songs to Make You Happy` this month It`s a lo-fi, DIY offering with simple guitars and vocals that reveal a collection of sketches, diary entries, polaroid snapshots, throwaway poems, and short stories. The singer grew up on the Welsh Marches and has penned two EPs in 2014 and 2016, more recently focussing his efforts toward his power-pop group Ski Lift who have been featured across major radio stations. He has also collaborated with Jovis Lane in pop outfit Show Boy and is currently a member of psych-folk group The All Night Chemist.

The album opens with `Song to Make You Happy` and it`s a kind of fuzzy sounding upbeat tale that appears as if it`s been recorded at home and almost becomes double tracked at the end. A strummed guitar and tapped percussion lead us through `In My Mouth` which enjoys some vocal harmonies and what sounds like a fiddle or violin sprinkled atop.

`Speed Camera` is a fairly amusing tale on an everyday encounter with a speed camera and the experience with this technological radar device that sets off the narrator on a sort of metaphorical train of thought. A delightful earworm of a number. We have a nigh on retro feel to `Birthday Song` with strummed guitar and brass that feels as it`s recorded some distance from the mikes. A number that revels in encouraging us to celebrate our special anniversary or others we know through a variety of measures.

`~South Downs Way~` is a short instrumental that may be the artist`s reflection of time spent on that range of chalk hills in the south-eastern coastal counties of England. A brief but endearing listen. There`s a kind of  philosophical train of thought shared in the fairly captivating `Free` which may  propel you to sit back and ponder for a while.

`Interstellar Stroll` is another instrumental musical soundscape with some intergalactic tones interspersed throughout and at the end. There was what sounded like a strummed ukulele accompanying the singer on the very brief `Little Satellite` which may well have been a kind of demo of the following number.

`Satellite` had a strap line of  “Can two long-lost friends find each other in the cold, lonely recesses of space?” and this does seem to sum up the number which is a soothing submission with acoustic guitar, bass and drums and lyrics that may be an allegory on friendship. I thought `When Autumn Comes Around` felt almost hymn like. A reassuring and reflective whimsical rumination on the season that marks the transition from summer to winter.

`To Your Eyes` was written around the New Year about the New Year and seems to share all the hopes and dreams most of us have at this commencement of what we hope will be a happy, healthy, and prosperous forthcoming future period. The narrator has penned this daydream for a particular special somebody for whom he wants the best. It’s an uplifting and inspiring contemplative reverie shared with vocals and strummed guitar broken up at around the midway stage with a short trumpet flourish. The album closes out with `Song to Make You Happy (Reprise)` which is a regeneration and extended take of the opening salvo with a line that I thought was simple but so effective and stayed with me long after the song had finished ” drop kick that sad thing and watch it fall down a steep  ravine, drop kick that sad thing and walk away and sing la la la”

`Songs to Make You Happy` is just that a dozen joyous contemplative but mostly uplifting tunes to lead you away from these dark and difficult times for thirty minutes. Time that I can assure you will be well spent and may even bring a smile to your face so job done!!

If  you’re a fan of lo-fi indie folkers like Elliot Smith and Matthew Jay you`ll love Benji Tranter, give him a listen.

Previous article
BAND OF THE DAY: THE BANISHMENT
Next article
INVITE RICK TO DINNER