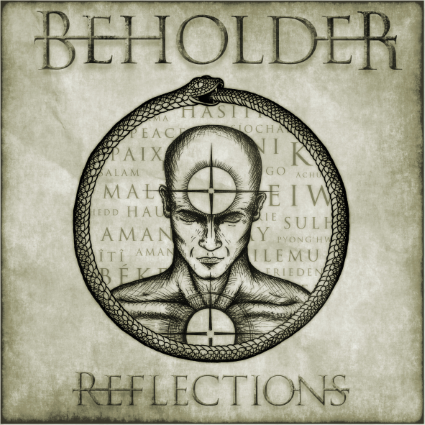 There’s many ways, as we all know, to skin the Heavy Metal cat. Some bands content themselves chasing girls and having nothin’ but a good time, others are happy with some World Of Warcraft type dungeons and dragons trip, the odd one wants to summon Satan. Plenty more, though, just sound pissed off. It’d be more or less impossible to imagine Slayer singing about chugging Jack Daniels with a stripper on your arm, wouldn’t it?

Closer to home, few bands have captured of this essence of cheesed off better than Beholder. And if they’ve never quite managed to do in the studio what they can do live, then that hasn’t stopped them trying.

Now, back with album number three, the Midlanders have evidently decided to up the ante, because on “Reflections” everything has gone up a notch. The riffs are a little more downtuned, the rhythms are just a touch more in your face, and crucially Simon Hall on vocals has his teeth just a that bit more clenched – which, means that even for him, his performance here is pretty full on.

Things on this dark – and it must be said occasionally overbearing –  10 tracker kick off with “The Frozen Steps Of Utoya”. This has been a staple of the band’s incendiary live set and as you might guess is their response to the horrible tragic events in Norway a few years back: “we expose you for who you are,” screams Hall, on its key line.

However, in many ways it’s the follow up song “I, Machine” that sums the album – and it’s attitude – up, however. A discussion on the daily grind, it has at its heart the nihilistic thought: “eat, sleep, work, die…..”

It’s tempting on first listen to think there is little in the way of light and shade here, and it is undeniably true that “Reflections” is unremitting in its bleakness. However, there is some subtlety on the music, “Heal The Wounds” has some fine lead guitar from Scott Taylor to complement Chris Bentley’s excellent drumming, there’s a pulsing, almost industrial quality to “Breathe In The Science” and there’s an clever riff to another of the highlights “Killing Time” but it takes a while for the full variations here to reveal themselves.

Taken on a purely visceral level, “Reflections” is a fists-in-the-air slice of modern heavy metal, and that it’s far cleverer than that isn’t immediately obvious, but it is. “My Revolution” for example could in less deft hands merely be a scattergun lesson in aggression, but here it is about empowering people to question the modern world, a thought that the closing “Speak To Me” makes absolutely clear. “Speak to me, with compassion in your heart” suggests Hall and in doing so finally reveals the message of hope that is at the heart of this record.

You only have to turn on the news to see how tough it in the world at the moment. If everyone had the attitude displayed on “Reflections” it would be a better place, and you may as well make this the soundtrack to the fight back.