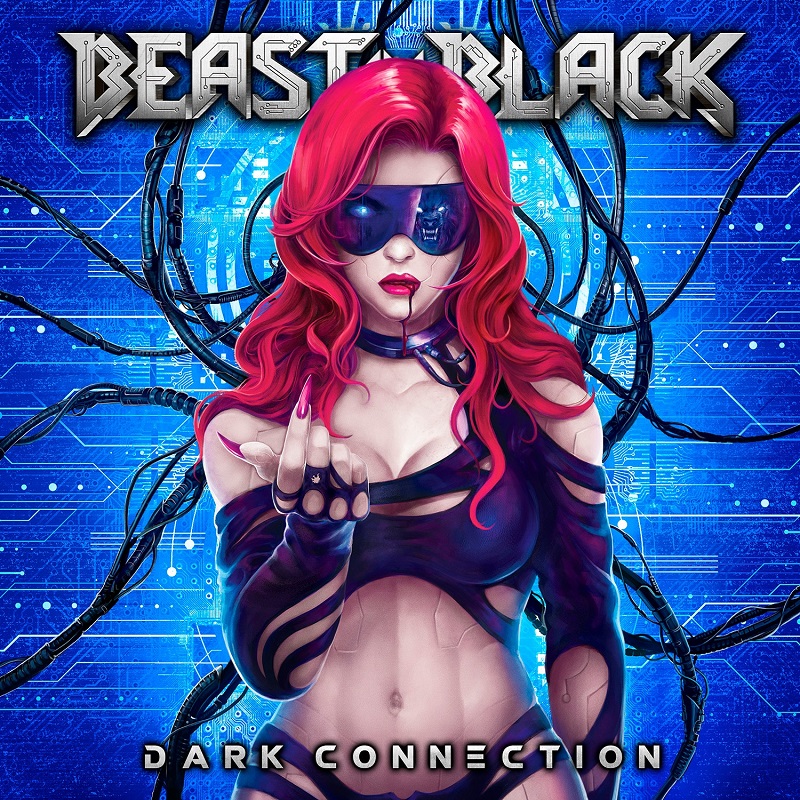 There are, in honesty, some phrases that chill my blood. “Gentle comedy” that’s one, “a sideways look”, there’s another. “Next up, here’s one from Queen”, stuff like that.

You can add to those, these two: “so bad its good.” Errr no mate, its either good, or bad. Nothing in between. And then this: “guilty pleasure”.

At 46 years old, frankly, I’ll like whatever I want to like and not give a toss what I am “supposed” to enjoy. I like Busted, is the world going to come to an end? No not really. I don’t like Gojira, should anyone be fussed?

That all being said, when I say the phrase: “I love power metal” you never do it with any confidence,  you shuffle, nervously, like you’re buying a copy of Razzle’s Readers Wives in about 1995.

But, we are where we are, and there’s a new Beast In Black record out and so good, so outrageously OTT and so resolutely and proudly bonkers are its intentions, that let me say it now: I am out and I’m proud. Fetch my leather trousers and lets go, power metal for life, baby!

Formed when the main man of Battle Beast decided that being in the world’s most out there power metal band wasn’t quite enough, BIB are what would happen if Judas Priest decided to chuck loads of synth and on “Screaming for Vengeance” and went to loads of discos in Europe.

If that sounds shit to you, then all the best, no hard feelings. The rest of you, dive straight in to “Blade Runner” do not pass go and collect your £200.

Anton Kabanen and Kasperi Heikkinen shred the solo in a way that would make Sam Trotman and Herman Li jealous, but what BIB do that Dragonforce (or pretty much any right minded human being) wouldn’t, is layer so much on top that it could win Eurovision. “Bella Donna” is your proof.

There appears to be some sort of concept running through this. Frankly I enjoyed it too much to care. “Highway To Mars” beats Bezos there, and is much more fun. Lets be honest, if you aren’t punching the air at the mere thought of its bonkers chorus, Beast In Black aren’t for you.

“Hardcore” does a kind of glam stomp. No one is quite sure why, beyond the words, “why not?” and things get proper Euro Disco on “One Night In Tokyo”. You half expect them to start singing “Rock Me Amadeus” at one point, and “Moonlight Rendezvous” seems like it wants to further the story.  It gives a chance to breathe, whatever. It passes for a ballad in these parts – and by the way, we’ve had some fun with the review, but singer Yannis Papadopoulos has a proper voice. Real range. The sort of thing you can see on a stage where Avantasia were.

And lets not overlook some other facts too. Whatever else this is, it’s a metal record. It’s just wired differently to other metal records. There’s a three song suite at the end where the band return to their themes of comic book heroes. I can’t claim to be a Manga expert, but I do know thrash drumming when I hear it, and “Revengence Machine” is as heavy as it gets, while “Dark New World” comes in with a riff that is early Maiden, and metal festivals are made for the likes of “Last Drop Of Blood”.

It’s a long journey, too. Very nearly an hour passes here from start to finish. “Broken Survivors”, an epic sounding – even for this album – it comes on like a film soundtrack –  “My Dystopia” and the even bigger “Battle Hymn” (perhaps best described as gargantuan? Unless there’s a bigger word, maybe gargantuan in capitals?) would be plenty elsewhere. Thing is, though, this is Beast In Black and they do metal on their own terms.

So they end with “They Don’t Care About Us” – yes the Michael Jackson one – and they don’t do a bad job, to be fair. There’s not many bands who would try it (fewer still who’d literally go for the “hee-hew” thing Jackson always did. But these Beasts are made of stern stuff.

Supreme fun, and probably the best album of this type you’ll hear this year. Ok, it’s the only album quite like this this year, but its still an absolute belter of a thing.