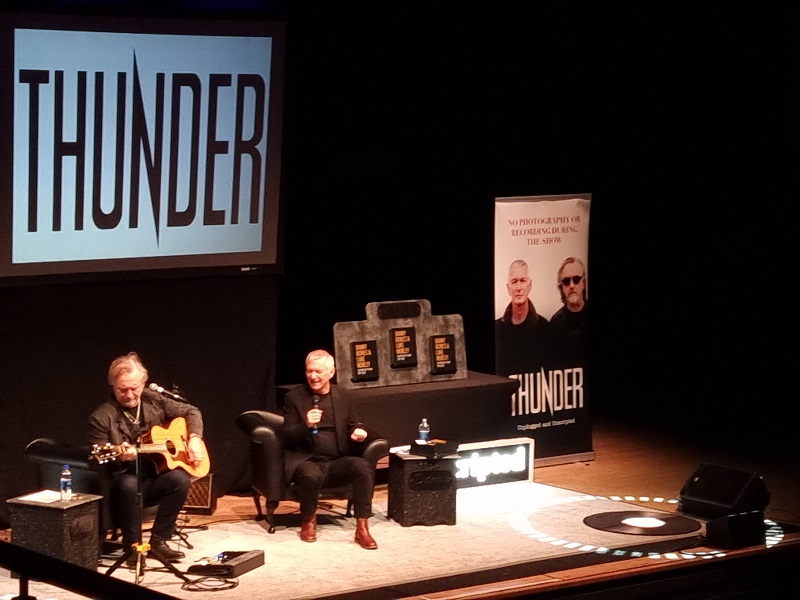 Every day’s a learning day, you’re told. So here you go.

Axl Rose has tiny hands, Danny Bowes once impersonated the whole of Take That in 45 minutes before hiding behind a wall to get away from screaming girls, oh the police came round to check if someone was being murdered once when Morley was recording demos at his house.

All this and more was discovered in the course of a couple of hours at the Town Hall.

See, Danny Bowes and Luke Morley are an incredible team. Since 1975, they’ve been making music together. Bowes, arguably the best voice there is in rock, and Morley has not only been a brilliant foil for him on guitar but also the genius who writes the songs.

Now for the first time, they are sat on comfy chairs telling stories from those years. Danny is used to it, of course, he’s done it before with Ben Matthews (and as an aside, I found out tonight that Ben was poorly again and I’d like to wish him well), but now the big two as it were are here.

It’s a celebration of the songs too, and like all the best of them they can translate to acoustics brilliantly. “Back Street Symphony”, “Like A Satellite”, “Better Man” and others. Interestingly there’s no covers here (when Matthews and Bowes were together there were plenty). But its more about the stories and the brilliance of Thunder here, than two blokes talking music.

There are some fabulous stories too. The ones about how Danny got the job in their proto-Terraplane days, the one about their manager spotting them at a talent contest, and when this convivial atmosphere mixes with some songs that you don’t hear them play much, like “Serpentine” and “Amy’s On The Run”, then you’re on to a winner, frankly.

The second half sees questions from the floor added to things (“most of them were awful, but some are alright” laughs Bowes) but to be fair, most of it continues in the same vein. One of them resonates with me, about the late, great Tommy Vance. His Friday Rock show was the first time I’d heard them, and you wonder if radio is still that important?

Some of the songs are mighty, if you can’t enjoy “The Devil Made Me Do It” then you aren’t trying, are you? It’s one of the few singles they play too (they did “River Of Pain” in the first half), but its not that kind of night.

The kind of night it is, though is one of rare warmth. The two are naturally chatty, and naturally gifted story tellers, and very, very obviously two other things while they are at it. Friends, with a real bond is the first one, but the second is arguably more important. They are ordinary blokes, who – and this is patently obvious from the tales they spin – realise how lucky they are to have been doing this for 46 years.

The reason why they’ve been able to, though, is clear in the encore: “Love Walked In”. Both a brilliant and beautiful song. You don’t get to be at the top that long without songs that connect. “People use this as the first dance at their wedding,” says Danny with an air of incredulity. “There must have been a lot of relatives wondering what the hell it was.”

Funny and humble. It makes for a hell of a chat. And a Sunday night chat is basically all this was. A special one, mind you.