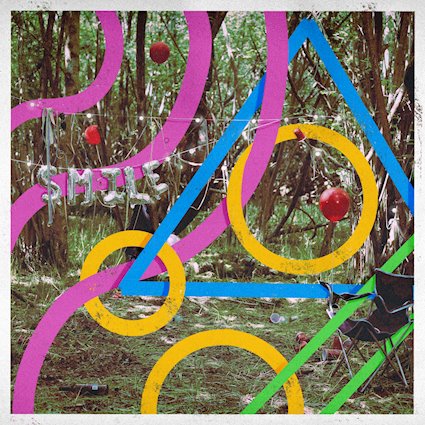 They have been described as ukulele indie punk as well as emo-pop. They release their new album `and everybody else smiled back` this month.

The album opens with `Cut Corners On Short Walks` and it sounds quite angst ridden. Although the band are still young this number is quite introspective and thoughtful. The lyrics seem to tell of incidents that happened that maybe weren`t such a clever idea on reflection. We have a further contemplative track with `I’m Doing Push-Ups` which vocalist Nick has said “is about my first year at university—falling in and out of relationships in an entirely unproductive and unhealthy way, and not stopping to take any time to work out within myself why I felt like if I wasn’t in a relationship I wasn’t whole.” A song that veers from beguiling to a little more insistent as it evolves.

`Baggy Hoodies` is an easy going kind of odd throwaway soulful submission with some odd lyrics but has a quite compelling sing a long song chorus with “da da da da`s” aplenty. There was an almost anthemic texture about `Heaven Sent Is A Coffee Cup` The lyrics were nigh on rapped at times during this uplifting canticle

`Keep It Easy` is a bouncy breezy brief number with it`s encouraging positive message. There are some, what sound to me like dreamy cello swathes through `Array of Light` which does seem like a glimpse of something bright through a dark cloud. We enjoy some spoken word segments throughout this mesmerising offering.

Although `Mossy Cobblestone` is under two minutes long there`s an awful lot packed into it. It opens with a strummed ukulele and vocal before a tapped drum rim, guitar riff and harmonies join in and fill it out. A concise but enchanting composition. I felt there was a real dreamlike vibe to `Confidant` with it`s intricate jangly guitar chords that led us through this ethereal piece.

`Little Cellist` is a song about friendship in hard times. Iain Gillespie, vocalist/bassist. Says “This is a story about me and a good friend of mine. She plays cello. She found me in a godawful state, which finally began my treatment journey for my mental health. I was lying on the floor of the student union building; me finally opening up to her allowed her to open up to me and we became each other’s shoulder to cry on. And she kept me safe during some very hard times.” An open and honest account of accepting help in difficult times, a number that won`t fail to pull at your heartstrings. We have something quite different with `Sun Machine` which seems to race along, a sort of indie offering that isn`t easy to compartmentalise.

`Great Heights` according to guitarist Nick “was written on a mattress on a hardwood floor at 4am after my friend’s birthday. It’s about those nights that don’t seem to end, where whatever bed you find (pavement/kitchen/outside of the train station waiting for the first train back to London) brings you the most comfort you’ve ever felt. It’s also about the fear that those nights are going to ruin you—you can’t make a bed that doesn’t have covers, and I don’t feel good if I don’t make my bed in the morning…” A reflective endearing slice of indie pop. We have in `If I Just Ask Politely` what starts out as a ballad but bursts into life as it develops with grandiose piano keys and string arrangements throughout.

The album closes with `Klimt Painting` which seems a larger than life opus to end on. A quite deep and expansive piece, maybe symbolic as were Gustav`s depictions.

I go back to what I said about this group on reviewing their EP last year, Bears In Trees are a bit of a marmite band and I can understand that their constant cheerfulness could grind on people but although I don`t like marmite, i certainly enjoy Bears In Trees. They are not afraid to address difficult subject matters such as depression and mental health but retain that childlike wonder of the world we`re living in. I felt `and everybody else smiled back` is a welcome ray of sunshine during these short, dark days of Winter.