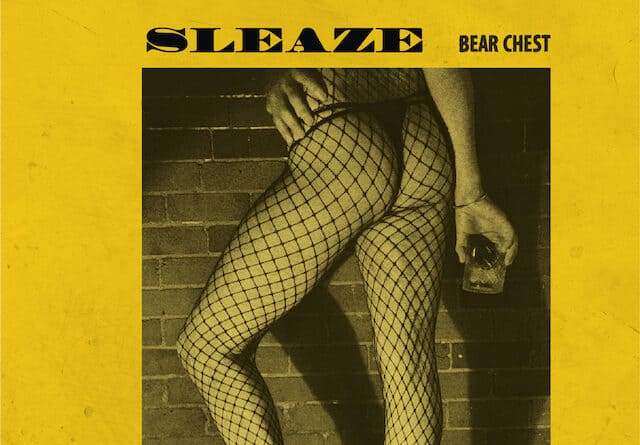 Social media has Bear Chest labelled as a raucous alternative-rock band from Sheffield, cooking up beefy riffs in their small rehearsal room, the three piece take their influence from the unadulterated sounds of the 70’s. This stoner rock trio Miles (vocals), Cal (bass) and Sam (drums) release their debut album `Sleaze` this month.

This eleven track offering opens with `Holy Roller` a fast paced rock out with vocals that almost bleed atop. A wonderful brutal slice of stoner rock with the menacing lyric “it`s not over they say, the Holy Roller he`s late, and it`s not over they say, the heaven`s broken come stay”. We have a much slower offering with `I Know You Hear It` with it`s kind of fuzzy riffs. A quite hypnotic number with questioning lyrics and quietly shared vocals at times which gives it that edge or threat.

`Burned Away` is a little less heavy but hurtles along and felt to me like a driving song, something you`d wanna have on while belting along the motorway. Tapped cymbals and a hazy bass line riff lead us into `Don`t Feed It` which ground away with quite dreamy vocals and harmonies which became quite mesmerising. It was almost trippy at times.

`Swinger` ups the noise factor with deep growling riffs. It becomes quite stupefying nearly trance inducing and enjoys some thumping drums at the death. I thought `Strip the Leather Away` was one of the more instantly accessible tracks which was pretty grunge like initially but becomes a real cacophony of noise towards the end.

`Snake Breath` grows from a quiet opening with grinding riffs and thumping drums and lyrics that almost feel like an add on to this crushing aural assault. I loved `Eat From The Inside` which seemed to me like an old fashioned no nonsense headbanger and had me nodding away and tapping my foot while listening. The repetitive lyric of “eat from the inside, just as we should” really gets into your subconscious mind.

`Red Cavern` is an outstanding submission. It`s relaxed and mid paced but retains that edge almost like the clam before a storm then it does erupt but only for a brief period. A cracking nearly psychedelic musing with a constant drumbeat. Stunning. Again, `No Love` is another exceptional composition. It`s an acoustic stripped back offering where you can hear the frets as fingers move across them. It did bring to mind Nirvana`s MTV unplugged `Pennyroyal Tea` for some reason but this is a track that will really pull at your heartstrings.

The album closes out with `Bleeding Through The Eyes` a doom tinged grungy fuzzy stoner anthem and a cracker to end on.

Bear Chest could easily be written off as another sludge and stoner rock band but they are so much more. I really enjoyed `Sleaze` and had to say I gave it a good blast a fair few times which i`m not sure if my neighbours really appreciated.

Sometimes you need something to blow the cobwebs away and `Sleaze` for me was just what the doctor would have ordered.