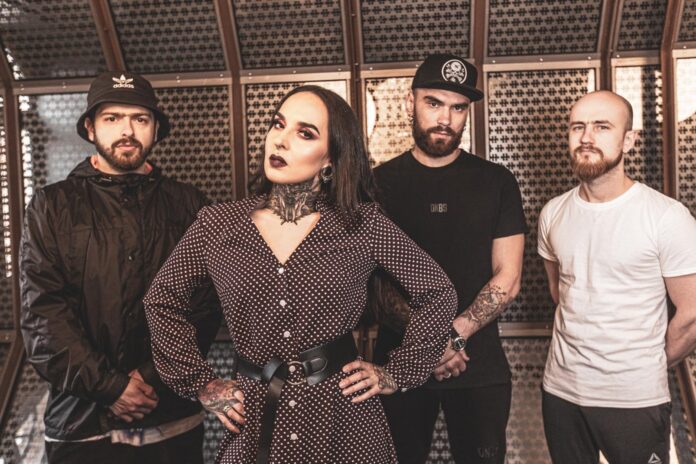 This past summer, progressive metal giants Jinjer released their most in-demand and successful album yet, Wallflowers, subsequently hitting the top of the charts all around the globe. In addition to several other top spots, the band landed at #7 on the German charts, #5 on the official UK Rock & Metal album charts, #1 on both the US Billboard Top New Artist Album charts and Canada’s Hard Music album charts, and #2 on the US Hard Music album charts.

Amid their livelyNapalm Records colleagues Space Of Variations, and their current nearly sold out North American headline tour with Suicide Silence and All Hail The Yeti – Jinjer pushed their limits and shot a massive music video for the album track ‘Disclosure!’.

With a fiery opening, ‘Disclosure!’ cuts sharp like a razor blade without making any compromises. Distorted guitars, multifarious drums and an interplay of invading screeches and deep growls unfold the full power of the chart-topping title. The video verges on a visually played mind game, which seems almost cinematically intimidating, transmitting the feeling of strength across the screen.

Jinjer bassist Eugene states: “The track ‘Disclosure!’ and the video itself is a very important video for Jinjer. Not only is it one of our favorite tracks on the new album as well as live, our ex-guitarist Dmitriy Oksen stars in the video and was great to work with him again, even if it’s in a different capacity now.”

On the video, Eugene continues: “Believe it or not it is not always easy being in the spotlight all the time … with each success this band reaches there is a huge amount of expectations from the outside that come with each step we make. From personal opinions to politics and now to the pandemic, our every move is scrutinized and judged by the outside. Although it’s not always fun, we would not have it any other way …”

The new album Wallflowers is available in the following formats:

Jinjer‘s exceptional precision of modern metal paired with tough as nails attitude has earned them a fiercely loyal, rabid fanbase and massive critical acclaim, making them one of the most talked about bands today and garnering them many sold out performances across the globe.

Since announcing Wallflowers, the band have graced numerous renowned international magazine covers, booked the biggest stories, sold out countless tour dates and their first two new singles, ‘Vortex’ and ‘Mediator’, both cracked the multi-million stream mark in no time. The new album not only presents a methodical and premeditated next step in the band’s already imposing career, but moreover, it mirrors the personal adversities they’ve faced due to the worldwide events of the last year. Wallflowers is not only an upgrade to the progressive groove metal sound that all Jinjer fans crave, but also a sonic pressure cooker of technical musicianship, emotional fury and an intense soundtrack befitting the harrowing state of the world today. Hailing from the conflict-ridden Ukrainian region of Donetsk but now calling Kiev their home base, Jinjer truly do not mince words – or riffs – on Wallflowers.