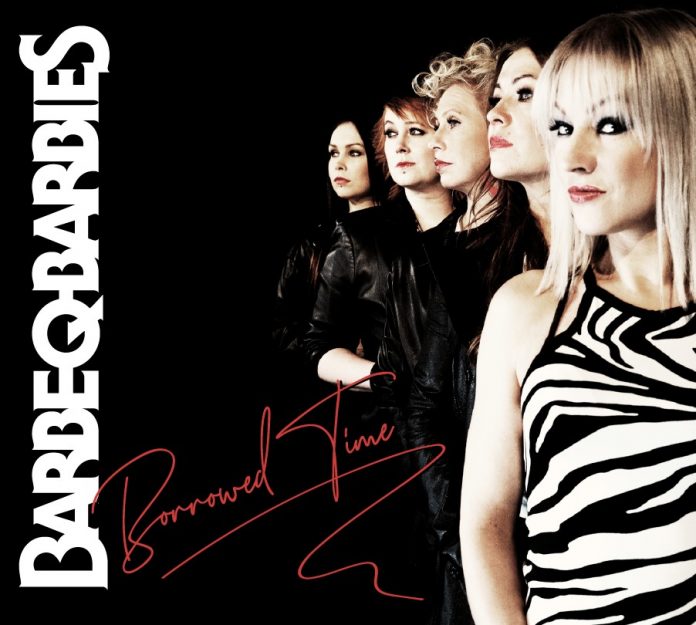 My feelings on music are pretty simple. As the greatest reviewers of all time – Beavis And Butthead and there are no arguments on this – taught us, music is simple. It’s either “cool” or it “sucks”. The rest is basically pointless waffle.

I noticed last week on Twitter, the Planet Rock DJ Wyatt Wendels, made a comment to the effect he was fed up of “all female” being seen as a genre. I’ve been considering this stuff a lot in the last few months. My first niece was born in the winter and I have been thinking a lot about the world I’d like her to grow up in. Chiefly, I’d like her to be judged on her merits, not by the fact she’s a woman.

To wit: “Borrowed Time” is the highly anticipated fourth album by the all-female, Finnish rock act BARBE-Q-BARBIES. The BARBE-Q-BARBIES are exactly what the world needs right now. In a sea of auto-tuned hard rock clones and sunset strip wannabes this Finnish band is here to set the record straight. Rock is, was, and always will be raw, dirty, and bad to the bone.”

That was the first paragraph of the info sent with the LP.

To take Wyatt’s point, who cares that they’re “all-female”? Surely what matters is that its good, right? Same as it would if Barbe-Q-Barbies were five blokes from Finland?

Well, yes and no. The fact is that “Borrowed Time” is ace, it really is. But then, on the flipside of that, if some young woman hears it and they become role-models then isn’t that a good thing too?

Essentially, “….Time” is half an hour of rock n roll done with a fresh twist. “Diz-Funk-tional” sounds like  AC/DC jamming with Dog Eat Dog and coming out with something a little funky, singer Niki has a presence and she’s just about perfect for a hard rock band.

The opener – beyond being very good like the other eight full length songs here – isn’t particularly indicative of what you get from them. “Alive” is cheerfully AOR, “Hangman’s Song” is simply a slice of confident, classy bluesy hard rock, while “Made Of Scars” is the kind of thing that would have seen Jon Bon Jovi putting another gold disc in his mansion in about 1992 – think one of their radio anthems like “In These Arms” and you aren’t too wide of the mark in honesty.

And if all those references in the two paragraphs are from the last century, then don’t make the mistake of thinking that this is some retro bullshit. It’s fresher than that. It’s just authentic. “What if I was someone that I am not” sings Niki on “Innocent” and that’s sort of the point, this is a band who is doing what it wants to, maybe what it needs to?

The best thing here – and its so catchy that you might need some cream from the doctors to remove it – is the utterly fabulous “Radio”, which is proud of its intentions, and is up front about the idea of world domination, while “On And On” has a kind of biker rock chug, which if it never quite gets to Motorhead type territory, then isn’t far off.

I am pre-disposed to like Scandinavian rock bands since I collected about a million 7 inches involving The Hellacopters and Backyard Babies in the late 90s. There is a whiff of the BB’s modern output about “Towers” but flavoured to with a proudly pop hook.

The title track lays it all on the line – over a righteously filthy blues riff the opening line is a middle finger to all those who say you can’t do this stuff: “Hell no, I won’t bend. Gonna draw a line and paint it red, don’t change me, cos in the end, maybe you’ll pay”.

They’re not lying either. “Borrowed Time” is the sound of a very good rock band that is making the music it wants to make – and that, really, is all that counts.