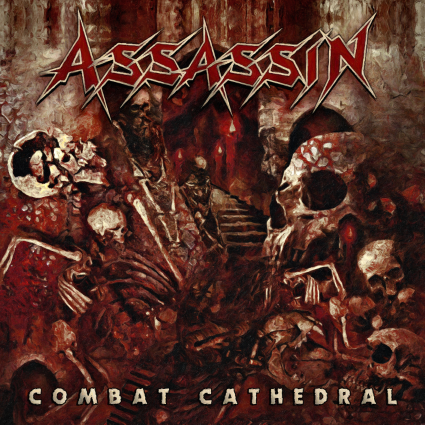 Dusseldorf’s Assassin underwent a period of uncertainty prior to recording “The Combat Cathedral”  their fifth full length record – and first studio effort for six years – is their first with new singer, Ingo “Crowzak” Bajonczak, who stepped in when Robert Gonnella quit a couple of years back. As well as being their singer, Gonnell had been a founding member and his leaving was a shock to the band.

These boys though – and you can take this literally – battle on. In fact, they appear to love a skirmish to the point where it drives them. There is a veritable anger, actually make that seething rage, contained within “Combat Cathedral’s” 12 tracks.

How much rage?  You ask. Good question. Perhaps this line from the song “Word” might answer it. “A battle with no armour” it suggests, “is like fucking with no hard on.” Quite apart from being the greatest couplet in possibly the history of heavy metal, the fact they do this over a whirlpool of thrash that is so viscous that you kind of suspect it’d fight its own grandmother if it had to is perhaps more pertinent.

The thought this is the Heavy Metal equivalent of a Sherman Tank filed with napalm is never too far away. Where some thrash metal records start with something understated, not here. Rather this kicks off with “Back From The Dead” which crushes at a million miles an hour, and surely is about to create a hell of a circle pit wherever and whenever it is played.

“Frozen Before Impact” has perhaps a slightly bigger groove, but its chorus wants to smash you in the face once it’s found its knuckle dusters, and if anything “Undying Mortality” ups the ante on every single front.

If you are looking for a tiny bit of light and shade, then the intro to “Servant Of Fear” looks likely to provide it, before absolutely slaying everything in its path and adding a real horns up hook that makes it the best thin g on offer in this particular place of worship, although the wonderful “Whoremonger” runs it close.

If we are honest, then there’s a bit of a feel of listening to the same song here to a degree, but if that is the case then its worth pointing out that it’s a hell of a song as “Cross The Line” and “What Doesn’t Kill Me” neatly prove, and if the album really needed further urgency then the bass groove to “Ambush” provides it rather magnificently.

The album doesn’t really pause for breath of reflection – why should it when its having so much fun? – as “Sanity For The Insane” passes by in a blur, but the ending “Red Alert” does take things in somewhat of an unsettling direction initially, but in the end settles for doing its business hard and fast like everything else here.

There are two ways you can go when losing a singer, you can fold or carry on (ok, there is a third way if you’re AC/DC but you get the point here). The results of “Combat Cathedral” are such that everyone can be satisfied with a job well done.