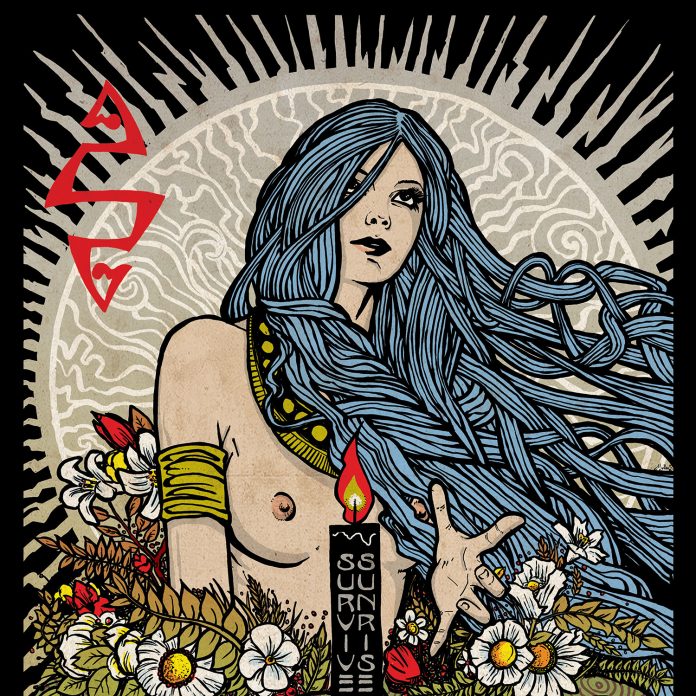 RIYL- Recommended If You Like. Four letters, an abbreviation that I wasn’t aware of before I started doing this website, but four letters that mean so much.

Without the RIYL this, the first ASG album in six years or so, might not have been reviewed. The truth is that as much as you love music, as much as you spend every day trying to review an album, you can’t keep up with everything.

And, to be brutally honest, I had never heard of ASG before this album turned up with this written at the very bottom of the pack that it came with: “RIYL; Baroness, Jane’s Addiction, Red Fang, The Sword, Quicksand, Fu Manchu, Kyuss, Truckfighters.”

Now, there’s enough there to get anyone excited. Crikey, mere mention of Baroness is enough to make mere mortals go weak at the knee, so you put it on the list to be reviewed.

And make sure its on your list to listen to forthwith, because “Survive Sunrise” is superb.

A collection that is straight down to business too, with the brilliant title track – the song that more than any other makes good on those Baroness claims – with its power chords, catchy hook and vocal display right from the top draw from Jason Shi (who in fairness is in stunning form throughout).

They follow this up with “Execution Thirst”, which is three minutes of more metal tinged stuff, while “Up From My Dreams” has a hint of Kylesa about it, and is heavy as hell, but all the while with an air of melodic accessibility.

If that is an interesting opening trio, then it is a fair indication of what is to come too, as the whole thing is shot through with an undercurrent of something more than the usual rock record.

Whether that is the thump of “Lightning Song” – which is one of many that comes at you on a wave of riffing – or the brooding, bass led deliberate nature of “Hawks On The Run”, a song which also has some shimmering psychedelics about it, this is a collection with as many twists and turns as your average prog rock record.

Another feature of the album is the poetic imagery of the lyrics, frankly there is no clue as to what most of it is about, but, like the rest of the stuff here, it works.

“Kubrick Colours” for example might have been out of place somewhere else, as it floats in and out in just about two minutes. Here, though, its integral. Likewise “God Knows We” which is as fuzzy Red Fang, does its hard rock with a trance like quality as Shi sings “God knows we don’t mean well…” and it burrows its way calmly into the conscience.

The double track vocals and groove of “Heavy Scars” are straight out of the desert rock playbook, while “Weekend Money” lives for its odd rhythms as it does its business. All of which is brilliantly contrasted by “Lamb Song”, which, with its Spanish guitar in full flow, almost sneaks up on you. “Florida Sleep On” on the other hand does its business in a much faster, heads down fashion.

“Survive Sunrise” is the sound, clearly of a band refreshed after its break, but also of one that formed 17 years ago and knows exactly what it is doing. Now, if you’ll excuse me, I have a back catalogue to check out. RIYL great music.