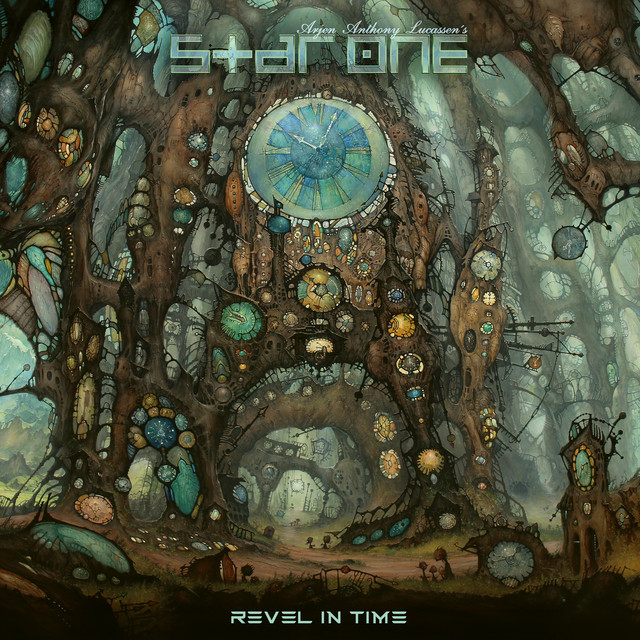 I’ve never met Arjen Anthony Lucassen, and I never want to, given that it would taint my view of him as some kind of mad scientist, surrounded by test tubes full of different genetics that he’s harvested from different singers. It would also help if he lived in an island you could only reach by sea and holed himself in some kind of lair just for good measure.

The idea I have of him as some sort of mad Bond villain of metal, has been with me since I lost my mind over the Ayreon record “The Theory Of Everything”. An album so good that I can listen to it almost a decade later and hear something I’ve never heard before.

I suspect “Revel In Time” will present similar goodies in future, given the sheer scope of the project. The first Star One album in 12 years is distinctly different in feel from the more overtly prog feel of that Ayreon stuff, but it is his first love: “Ayreon is like the mothership for all my music. It contains all the different musical styles that I like to listen to and that I love to create”. And a little like getting back with your ex, I guess, you know all the little things that make it tick.

There’s over two hours of stuff here. Two discs with the same songs on, but with different vocalists. It makes for a strikingly different, immersive experience too, but its disc one we’ll by and large concentrate on, because as ever Lucassen has pulled in a who’s who of people to sing these.

A kind of concept record, given that each track is “inspired” by a film – but do not worry, even if you’re like me and don’t have the attention span for extensive notes when you listen to your music, there’s much here to absolutely love on any level. Not least the first song, “Fate Of Man”. The vocals here are handled by Brittney Slayes of Unleash The Archers and she is stunning.

In all honesty, everything here is stunning. The musicianship is – as you’d expect – incredible, and “28 Days To The Time” (featuring Symphony X pair Michael Romeo and Russell Allen) is particularly good. What Lucassen has done so well is pick songs for the singer, which is vital.

“Prescient” begins with some Yes style keyboards, before Ross Jennings of Haken owns it. Stadium shaking, seemingly belonging in another universe given the scope, it dovetails with the Deep Purple sounding “Back From The Past” – so good are the keys here that it upstages Jeff Scott Soto – superbly.

The title track gets bonus points for having Brandon Yeagley of Crobot on. Say no more, but yer man, he roars as only he can. He always sounds like he’s on another planet anyway, just here he makes it plain. Plus, Adrian Vandenberg plays guitar here. And there’s a bit where it goes “Shock. Rock” in the chorus, that Is pure glam.

“Year Of 41” (and check the alternate take on disc 2 for some brilliant keyboards from Alessandro Del Vecchio) is rather stolen by Joe Lynn Turner singing like a God, while the heavy groove of “Bridge Of Life”, coupled with some Marillion-type work is perfect for Damian Wilson (ex of Threshold) never knowingly a man to hold back, he gives it all here.

The styles of this are striking. “Today Is Yesterday” is one of the most “metal” on the surface, but its interesting how it switches to something altogether different, and while there’s no mistaking Floor Jansen of Nightwish (she always seems to work with Lucassen) its still a treat to hear her stretch herself on “A Hand On The Clock”.

“Beyond The Edge Of It All” is gloriously pompous, and totally unashamed and notable for the rare Lucassen solo), while the last one “Lost Children Of The Universe” is special, due to not only its brilliance, but the appearance of Roy Khan (who doesn’t sing much these days) but also the Steve Vai solo (and the alternate take features Tony Martin, which underlines how good this one is, perhaps?).

“Revel In Time” wouldn’t have been right in any other hands. Here, though, it’s the best Arjen Anthony Lucassen record in years. No one else but some mad, musical maverick genius would attempt it. Star One, have lifted off once more and this might be their best ever journey.