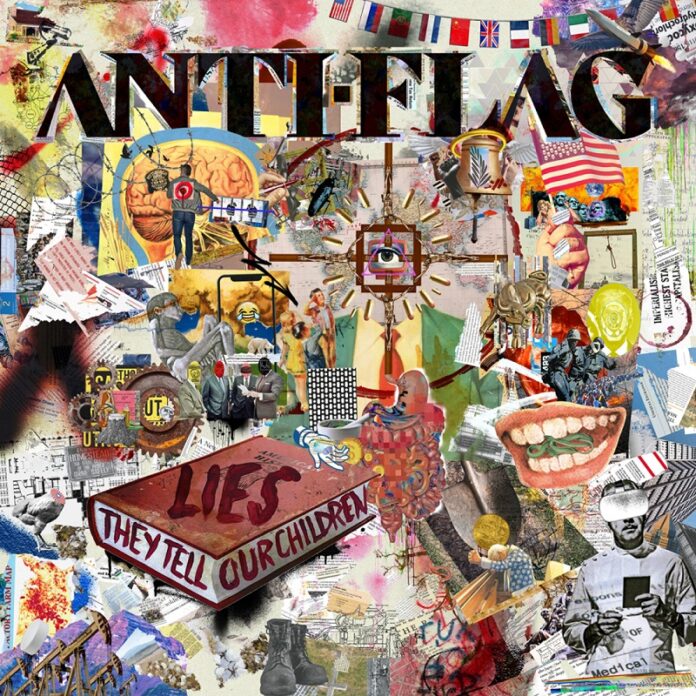 I’d like to take this opportunity to add to the list of 2023’s vague promises: It is my intention at some point this year to send a night with Kylie Minogue. This has been my intention since about 1989, but the beauty of 2023 is you don’t have to back any of your ideas up or tell anyone how you intend to achieve them.

Take the last two days in the UK. Yesterday we had Sunak making a series of pledges that amounted to the fact he was going to ensure night followed day, then today, Starmer, the leader of an opposition that doesn’t oppose anything announced …..well, not a lot beyond that he was going to do something, at some point. Maybe.

Which is why we need Anti-Flag. For 30 years they’ve been doing anything but staying in grey areas, wearing their beliefs as badges of honour. Fighting for people, for equality, for a fair distribution of wealth.

And – as this is a music website – making a series of brilliant albums.

Even for them, though, album number 13 is both magnificent and a mighty statement.

It’s 11 songs are both a loose concept record and also feature a litany of special guests, making it one of the most wide-ranging records of the AF career.

The opening is just them solo, “fuck the Pittsburgh police and the President too” Justin Sane sings over a rather mellow little thing. That acts as the intro, the aperitif, if you will. “Modern Meta Medicine” has Jesse Leach of Killswitch Engage taking things to a really heavy place, both lyrically and musically, and it feels like the handbrake is off and away we go.

“Laugh. Cry. Smile. Die” sees Silverstein’s Shane Told, doing his thing: “The lies they tell our children, teach them everything we know” seems a key line (and not just because it contains the title of the collection) but because its basically the whole belief system.

There’s beautiful, controlled aggression everywhere you look here, but nothing better than “The Fight Of Our Lives”, where they are joined by Brian Baker and Tim McLlrath of Rise Against. “There’s an echo ringing that we’re going to war. It’s the same old story, we’re still killing for sport” goes a line that is both wonderfully Orwellian, yet entirely true.

“Imperialism” is a disco for punks, Chris Head’s guitar is perfect, Ashrita Kumar of Pinkshift adds her vocals, and there’s a dumb, glam feel, but its anything but. It’s a glorious, shiny boot to the bollocks.

The folk tinged “Victory Or Death (Gave ‘Em Hell)” has Campino of Die Toten Hosen adding a real melody that’s sprinkled with Skinny Lister playing metal. It’s glorious, as is one of the ones where they are just themselves, “The Hazardous”, all buzzsaw guitar and dystopian desolation. “Shallow Grave” has massive intention and a hook to match as well, but its on stuff like “Work And Struggle” where they truly excel. This is a band that makes an art of sloganeering words and there’s some beauties here.

Producer Jon Lundin has worked with Good Charlotte amongst others and his gift for melody shines through on “Nvrever”, stomping, sugar sweet, yet caked in barbed wire, it is perfect even before Stacy Dee’s harmonies.

“Only In My Head” ends it like a more usual Anti-Flag record, as if to underline that it could, if it had desired, been that, but even though what happened with the record seems to have been organic, the different turns it takes are to its credit.

30 years into careers, bands usually are taking it easy. Anti-Flag aren’t most bands, though and they’ve got things to say and boundaries to bush. They do it here with a true exuberance.

Now, has anyone got Kylie’s number?

Previous article
SATANIC, NO VERSES
Next article
SUMMONED TO SLEEP