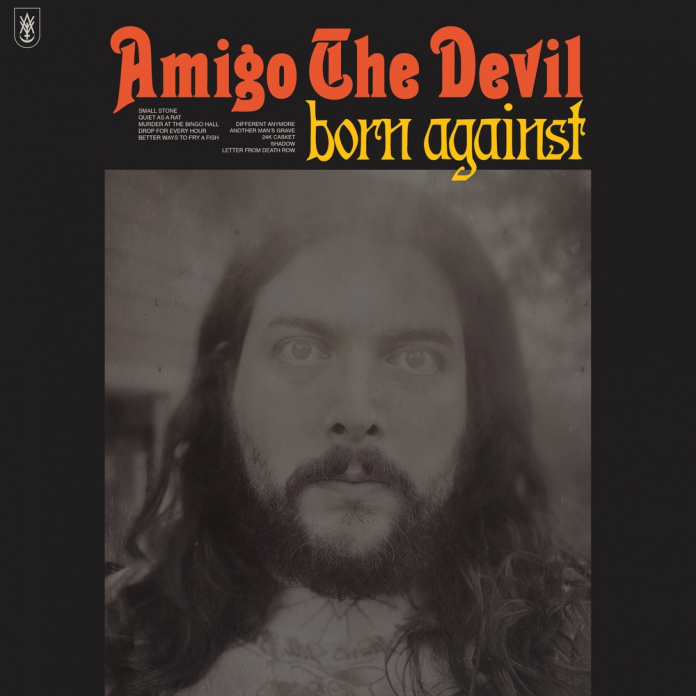 Such a lovely thought? Well, yeah, normally, but maybe not if you’re going with Amigo The Devil.

See, Danny Kiranos writes songs like no one else. So he’s dosed up on “cocaine and Adderall” on this one – where he plays some scary assed freak who is about to yell “house”. Bob’s Full House this is not (anyone under 40 ask your parents).

ATB or DK – and which is closest to the truth is open to interpretation – is one of the great wordsmith’s of our time. He writes songs, he uses words like no one else does (we can point to Tom Waits as the most likely, but even that doesn’t quite do it).

I watched in concert last year, he was incredible that night, and as I noted in the review of the gig, the reason “Everything Is Fine” – his debut full length – was never reviewed on the site was complicated. It was brilliant, but at the time, it was too close to home, as it were. The darkness, the depression, the violence in the mind. I was on the way to a breakdown at the time of the gig. I didn’t know it then. I am in a place now, though “Born Against” can be written about – and lets be totally clear about this, its one of the most unique records of the year.

It is batshit crazy, I mean, if you want some easy listening look elsewhere, because this is not the Americana of “…..Fine”, gone mostly, are the dark acoustics and replacing them are….well, what exactly? Good question. “Small Stone” with its lush strings is like some lost Sinatra tune, before the words “I’ll show the pain of getting clean” ushers in a wave of sound that would make Biffy Clyro jealous. Arena filling? Well that’s not what we signed on for! It’s ace though.

“Quiet As A Rat” (the rat is God, to be clear) goes down some Urban Voodoo Machine jazz freakery, as it discusses the duplicity of religion (“everyone treats commandments like a bucket list”) with a rare wit.

A peculiarity of this is that “Murder At The Bingo Hall” is one of the few were no one die. “A Drop For Every Hour” sees a violent and bloody end – fuelled by cocaine, whether these are fantasies, who knows? What I do know is this has some odd type of mariachi rhythms.

“Better Ways To A Fry A Fish” has a Springsteen, “Nebraska” feel, and for 79 seconds is the most violent, graphic and weird thing you’ll hear, while the fragile acoustic battles continue with “Different Anymore” and if “Another Man’s Grave” is one of the highlights then the Nick Cave-isms aren’t lost on anyone. The imagery, though, the cast of characters is incredible.

There’s a foray into bluegrass for “24k Casket” but as far as I know the Del McCory band have never uttered this as an opening line: “Everyone says that money can’t buy happiness and so far in my life I’ll agree – but it seems a lot more comfortable to cry in a Lamborghini”.  “The Shadow” finds some primal sounds, while “Letter From Death Row” is beautifully poetic. A real country song, there’s a warmth as the inmate plans to die at midnight.

This is not for everyone, but whether you like it or not, this is an astonishing record.  As it ends, sort of shuffling off into the darkness on its final journey, a Springsteen line keeps popping in: “if you could take a man’s life for the thoughts that’s in his head…..” he sang on “Johnny 99”. In many ways, “Born Against” is that idea made flesh. The dark thoughts you have that you never say. They are where Amigo The Devil starts.