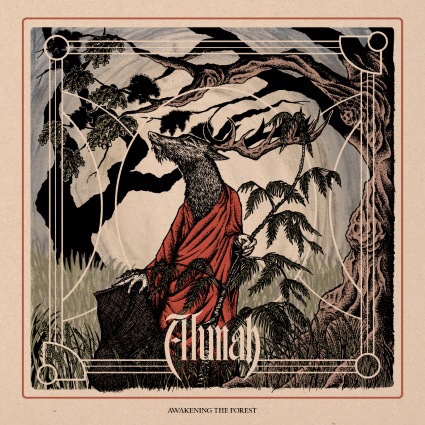 It’s probably three and a half years since MVM walked into Birmingham’s tiny upstairs at the Asylum venue to watch the extremely mighty Stone Axe. One of the support bands were just setting up.

A few minutes later the group got onstage, played a funereal doom riff and the singer added her take over the top. They were good, and everyone knew it.

In the intervening time, if you’ve seen a doom or stoner gig in Birmingham and beyond then you’ve seen Alunah too. These men – and lady – have paid their dues and then some.

The hard work had paid off for them and album number three “Awakening The Forest” is appearing on Napalm Records, with an attendant European tour to coincide, the only question remaining is whether they could produce something that showcased their sound as well as you would hope: the answer is absolutely unequivocal but we’ll get there in due course.

The spectre of the great Birmingham band who essentially invented this sound is never far away from “…..Forest,” which, although only six tracks clocks in at nearly an hour. The air is dense and thick, the atmosphere almost oppressive, right from the moment “Bricket Wood Coven” builds it’s way slowly and deliberately and tells it’s tale of a shadowy woman.

If anything “Heavy Bough” , which follows, takes things up a notch, adding more groove and a mighty riff from guitarist Dave Day, while the title track is a frankly enormous affair, with the vocals from Soph Day, who writes most of these mystical lyrics, taking on a discordant quality as they worm their way through the verse.

“The Mask Of Herne” is arguably the heaviest thing on offer here, almost pounding through what – for this record anyway – is a short and jaunty six minutes, while the rhythm section of new bass player Dan Burchmore and Jake Mason on Drums, is all over “The Scourge And The Kiss,” and the track is one of the one of the albums highlights. Lord knows what it’s about, and given that one of its lines is “the ritual is passed around,” you are probably best not asking, but it is quite superb.

Perhaps the most impressive thing about “…..Forest” is that there is so much light and shade here – and that’s not easy in doom metal. Closing track “Summerland” begins in an almost quiet, understated fashion, but builds into a fine crescendo. As it does, it showcases a band that will not just be constrained to one thing, to one style and these fresh ideas are really evident here.

“Awakening The Forest” is an album Alunah can be extremely proud of. It will be tagged as Doom Metal, but actually it has so much more than that to enjoy.

So have they showcased their sound in the way that everyone who saw them live hoped they would? You bet! Surely it’s not just the forest that will know Alunah are around.