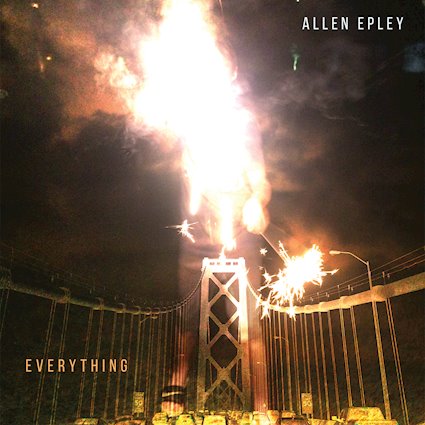 Allen Epley is an American musician originally from Louisville, Kentucky now based in Chicago, Illinois. `Everything` is his debut solo LP and is influenced by the music he was brought up on, a diet of Bread, James Taylor, Carol King, Blood Sweat and Tears, Three Dog Night and 5th Dimension.

His previous bands Shiner and The Life and Times reflected more opaque images of bands like Swervedriver, Slint, early Smashing Pumpkins and Failure. While working on a batch of compositions for film / tv, the artist realised these ghosts had never left him but instead had embedded themselves in his subconscious. The result of this retrospective journey is his solo album `Everything`.

The album opens with `Thousand Yard Stare` which eases us in gently with some breathy vocals and a quite mesmeric beat. The singer has shared that the number is about “a person close to me who’s consistently lied to me about their drinking. Hidden solitary drinking. It’s written from their view point and they’re clearly at an all-time low. Definitely driving away from everything; away from the other person; away to indulge and to give up on trying anymore” . A quite dreamy number that maybe reinforces the age old adage that you can never judge a book by the cover as I’d never have guessed the subject matter from the musical timbre of the track. There were some beautifully presented guitar chord riffs throughout. We enjoy some wonderfully subtle steel guitar shared quietly in the background of `Evangeline` which is another quite spellbinding number with wistful guitar tinges sprinkled liberally throughout its lifecycle.

`Spider Rico` has shimmering guitar chords and lap steel that lead us in and along a kind of reflective journey as a light drum beat joins with beautifully shared orchestrated strings which really fills out the sound. The thoughtful and philosophical vocals brought to mind John Grant of the Czars for some reason. A delightfully introspective and melodic musing that felt almost cinematic at times. I read that `The EMT` was written about a flight paramedic with an undying love for someone he’s only seen from afar, until by (un)lucky fate, she’s in a near fatal accident and he gets to finally hold her. An expressive tale shared over an entrancing musical soundscape. I think this is the first number i`ve heard written about Emergency Medical Technicians.

Title track `Everything` is a fairly contemplative piece that has a strummed or plucked guitar with additional orchestrated strings almost drifting above and quite probing vocals. A fairly deep offering. There was a nigh on trace like or dream like texture to `Deader Than Dead` which found me travelling into thoughts of my own as it progressed with guitar and lap steel tinges and a balancing drum guide.

`All Good Things` has some intricate guitar chords that kind of build a platform for the meditative vocals to float above. There`s a tapped drum rim sound in the background that to me gave the idea of a ticking clock, maybe a sense of time moving on and all good things being finite. The penultimate number `I’m the One` is fairly stripped back at the onset but gathers a fuller sound as it evolves with a glockenspiel or similar percussive element and steady drumbeat. This ruminative reverie switches between both phases again before closing out.

This release closes out with `The Lucid Dream` which is probably less lucid than its title suggests. It`s fairly dreamy with lyrics shared softly over a solid drumbeat and lap steel nuances before fading out with a tranquil ambient sound for the final couple of minutes.

`Everything` is an album that really needs time set aside to fully appreciate it`s many subtle nuances. It has a fairly beguiling and captivating texture and i`m sure is a release that you`ll unearth something different on each repeated listen.

A really gratifying and enjoyable submission to open the new year on.

Previous article
TO THE MAX
Next article
REVIEW: LORD OF THE LOST – BLOOD AND GLITTER (2022)