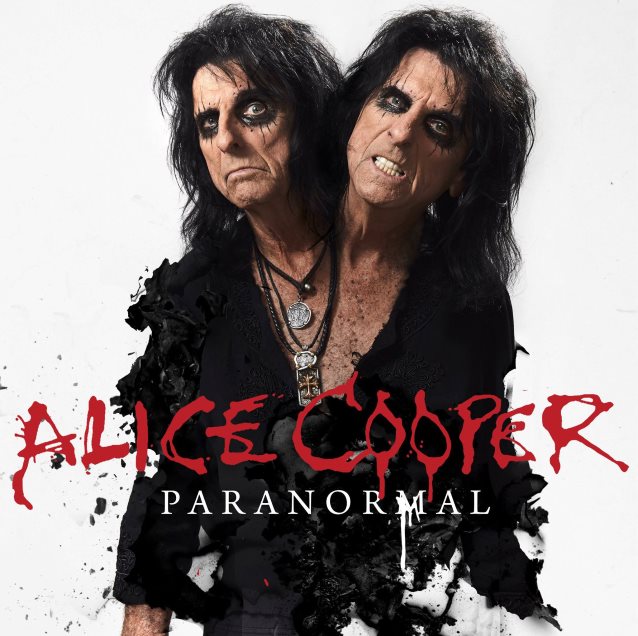 The undisputed king of shock rock continues to attempt to crush the pretenders to his throne on 27th studio album,  a mere 48 years on from his debut.  Does he still have some pretties for you?

At a sprightly 69 years old Vincent Damon Furnier, or Alice Cooper as he is more commonly known, is showing no signs of the five decades of rock n’ roll debauchery and superstardom. It wasn’t always this way of course and he looks and sounds far more vibrant now than he did 30 years ago.  He has Golf to thank for that.  Playing every day clearly agrees with him.

Studio album number 27th kicks off with the creepy title track “Paranormal”.  As one might expect from a man of Cooper’s reputation it is a sinister tale of  loneliness and despair backed by a rolling drumbeat and jangling guitars.

Although in many ways the album harks back to the classic hard rock sound of Cooper’s 1970’s heyday in producer Bob Ezrin’s hands the sound is as modern and relevant as the genre gets.

With 50 years in the business Cooper has made many friends and a couple of them show up to offer their talents to the album with Deep Purple bassist Roger Glover lending his fingers to the title track and U2 drummer Larry Mullen pounds his beat over nine of the ten tracks.  However, this album is all about the man himself.

There are a number of standout tracks on offer from the hard rockin’ bluesy intent of “Dead Flies”, which could have been written 40 years ago,  to the fantastic foot-stomper “Paranoiac Personality” and blazing through to high octane “Rats”.  All three are classic Cooper.

Between those tracks the quality never dips and just as important, neither does the energy.  When the vast majority of old rockers are happy to coin it in with a greatest hits tour every couple of years Alice Cooper continues relentlessly to push forward and create new classic tracks for the maniacs who worship his every step.

The cult of “celebrity” personality gets a beating with a pulsating “Private Public Breakdown” and whilst the lyrical themes never get past the macabre, it’s Alice after all, the variety and musicianship is unabated as “Dynamite Road” and “Fallen In Love” prove.

The album proper finishes with the mysterious “Sound Of A” which is unlike anything on the rest of the album but is typical Cooper with a Pink Floydian-vibe and darkened edge.

The bonus disc features live tracks from 2016 but more importantly two brand new tracks with the original Alice Cooper Band.  That’s right folks the surviving members, guitarist Glen Buxton sadly passed away 20 years ago, have rejoined Alice for a couple of tracks.   Dennis Dunaway, Neal Smith and Michael Bruce sound as good as they ever did and it’s clear the magic is still there.  The two tracks “Genuine American Girl” and “You And All Of Your Friends” are borne of the 1950’s but contain the swagger that marked the band out all those years ago.

We may not be worthy, but we sure as hell will take any new Alice Cooper music, particularly when it’s as good as this.  Fingers crossed he plays some tracks from this superb album on his UK tour in November.

The Coop still sounds fresh and as vital as he ever did.  Whilst this old rock dog may not be learning any new tricks he is still undoubtedly the man to which all other rock stars aspire to be and he is still outshining them all.