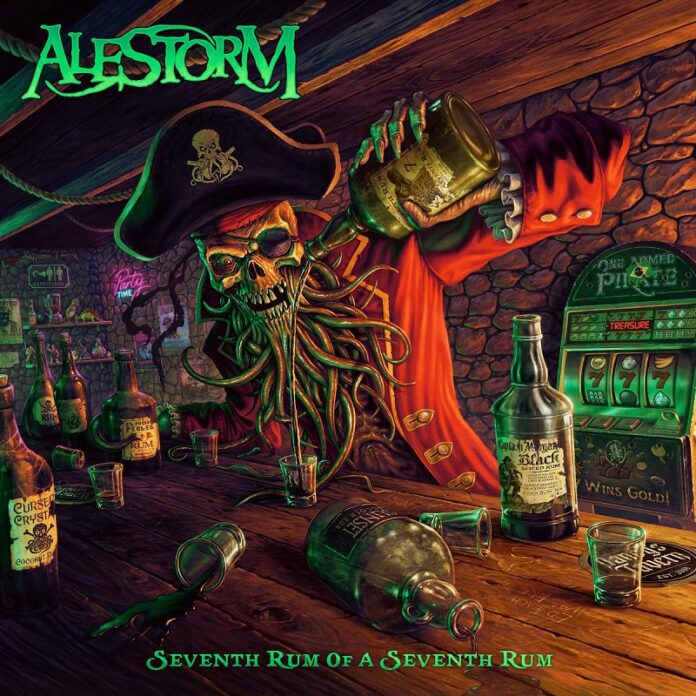 What else, really, were Alestorm going to call their seventh record? “Seventh Rum Of A Seventh Rum”, is proof that I don’t know what I am talking about. “The genre might be restrictive, but the boys are on album number three and are just about the most fun metal can be. Stick Steel Panther, their godawful pastiches, up your arse. Who needs them when you have Alestorm playing “Shipwrecked, “Keel-hauled” and “Captain Morgan’s Revenge.”

I wrote those words on 30th September 2012 on one of the blogs that preceded this site. “Restrictive”? No one told Alestorm. I was right about Steel Panther, mind. They are still toss.

Anyway 10 years on, here’s album number seven and its one of the most batshit crazy records they’ve ever done (that’s a big call, but its fair enough, trust me, the deluxe version of this is mental).

Look, you know what they’re gonna do at this point. You either love Alestorm, or you think they should be thrown overboard. There’s no inbetween. There seems to be a bit of an air of that about the band these days. Like Christopher Bowes and the merry men are doubling down rather than watering down.

The opening “Magellan’s Expedition” is so OTT its like a sea shanty with Dragonforce (who they were opening for that night in 2012) and that’s one of the more sensible. “The Battle of Cape Fear River” is nudging towards crackers. “I’m a fucking pirate” explains the chorus, helpfully. You are whatever you want to be in this world, I guess.

It says much for the album that such a song isn’t one of the daftest. “Cannonball” starts off being played on a Casio keyboard, it seems. It ends with a chorus that might be somewhat tricky to achieve anatomically.

The best/stupidest/catchiest/worst of the lot is “P.A.R.T.Y”. It’s Eurodisco. It contains these words: “I get a funny feeling from my head down to my knees/The feeling goes no further ’cause my legs are made of wood”. It’s as metal as you like. And you try and ignore it. Try and stop singing it. You won’t. You can’t.

“Under Blackened Skies” – built round a keyboard riff and a lead guitar that The Dropkicks would be proud off is one of the heaviest, “Magyarország” docks in Hungary to cause all kinds of shenanigans (its basically the same as the others, it just rhymes ‘quest’ with ‘Budapest’).

The title track – which in my head starts side two –  sounds the bugles and gets down to it. There’d be a moshpit when the opening riff hits, “Bite The Hook That Feeds” sees a murder done and piracy dry docked as they look for a change of career. No one believes such things, lets be real.

After that we’re off around the world. “Return To Tortuga” (a kind of follow up to a tune that was on the last one) sees Guns N Roses imitated like you’d never imagine. Axl with an eye patch? Eminently better than GnR’s recent Tottenham gigs, by all accounts. “Going To Brazil” is a sort of thrash metal -cum-nursery rhyme (there’s a weird xylophone thing going on).

It ends with “Wooden Leg (Part III)” as they bring the story to a conclusion. A folky thing. With Japanese lyrics, it’s oddly incongruous anyway, even before you read this: “Most importantly, the album features the world’s first use of a fried egg as an instrument in a metal song”. I don’t know either. Maybe its best not to ask.

So its time to stop asking how long Alestorm can carry on doing this and instead accept they are the kings of the high seas. “Seventh Rum Of A Seventh Rum” is, like the egg they used, cracking.