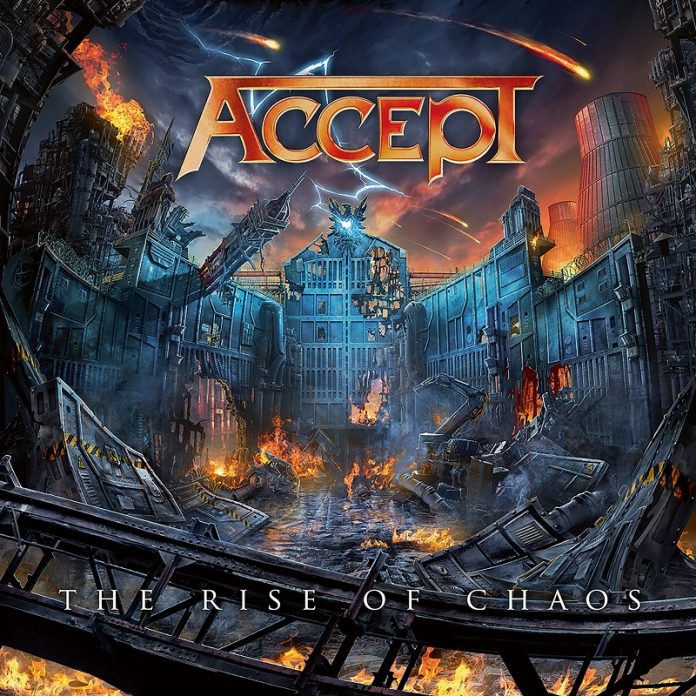 A lesson in staying relevant in the digital age

“I was born in a cave/When stereo was all the rage…..now there’s flat screens and 3D/ my cellphone is smarter than me”
– Accept: Analogue Man, 2017

And on those two lines, Accept not only encapsulate what many of us feel when we get to, lets say, a certain age, but also why this record is so great.

Sounding more energised than any band has a right to after 41 years on and off, “The Rise Of Chaos” is a classic heavy metal record. One that is clearly influenced by the NWOBHM (and not least because singer Mark Tornillo has more than a shade of Biff Byford about him) but still manages to crackle with an energy.

If you were looking for clichés, you might even say that on their first album for three years (but their fourth since a serious reformation in 2010) Accept clearly set out to leave, play loud, fast and nail, well,  their balls to the wall.

Their last one, “Blind Rage”, gave them their first number one, which is a staggering fact when you consider just how stellar their career has been, and we’d venture to say that “….Chaos” isn’t going to be too far behind.

From the opening riff of “Die By The Sword” it is absolutely certain that this is not a band with nothing to say. Rather it is heavy, but also fun – and expertly well played too.

“Hole In The Head” (and any track that starts with the line “I need you like a prison term” has got to be alright) seethes and broods with a genuine anger about something, while the title track sees guitarist extraordinaire Wolf Hoffmann enjoy himself as they take in almost thrash moments, while “Koolaid” takes religion to task with a genuinely catchy chorus that doesn’t half sound like Deep Purple. A real shining light, it is but one of many.

Pick a song from anywhere and there is something to commend it. “No Regrets” brings the drumming of Christopher Williams to the fore, “What’s Done Is Done” is a Maiden style gallop, and “Worlds Colliding” has a simply wonderful guitar solo.

There is no letting up before the finish either, “Carry The Weight” is their state of the union address if you like and is probably the first metal song to mention Brexit (granted MV hasn’t actually researched whether this is the case).

Ending with nominally its longest song, “Race To Extinction” is still – despite having an epic feel – just under five and a half minutes. No need here for the huge sprawling behemoths that other bands of their type do. Not that Accept couldn’t do it, it’s just that “Rise Of The Chaos” isn’t that type of record.

It is as that couplet at the start makes explicit, difficult to maintain a relevance in a world that’s left you behind years before. The way that Accept have chosen to do it is to make their best album in a long time.