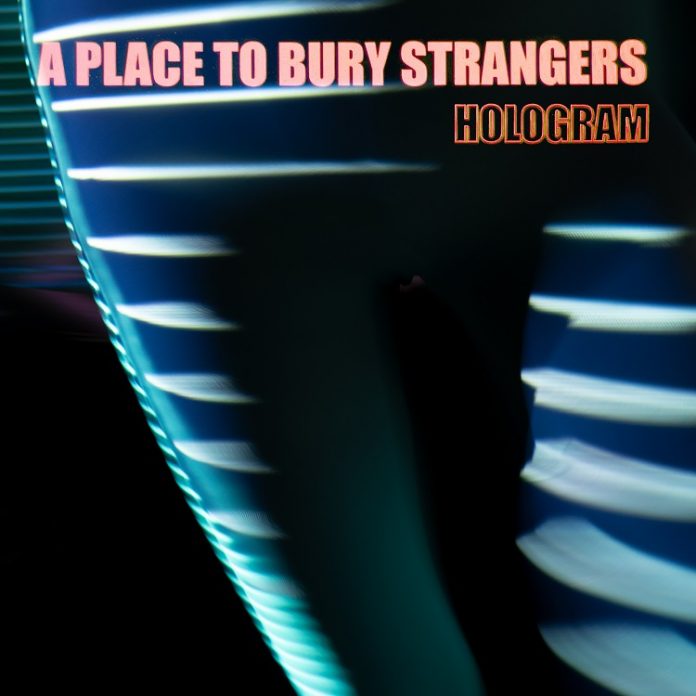 This year has brought changes to New York based heavy atmospheric wall of sound merchants A Place To Bury Strangers, where vocalist and guitarist Oliver Ackermann has revamped the line up with new members John Fedowitz (bass) and Sandra Fedowitz (drums) joining. This new look APTBS have a five track EP `Hologram` released this month with songs addressing the decay of connections, friendships lost, and the trials and tribulations of these troubled times we live in.

`End Of The Night` opens with a synth key and a constant drum beat before bass and guitar riffs join to build a crescendo of noise. There are vocals that at times feel quite hypnotic and blend or bleed into the musical swell. I have to admit that I was unable to decipher what was being shared vocally apart from “now that the night is gone” and the words may have even been spooled backwards. There`s a much faster pace to `I Might Have` where “past reflections collide with the brutality of a disintegrating world, stories of personal trauma, acceptance, and human failings emerge from the rubble of noise and destitute motorik rhythms” which probably sums it up better than I could.

`Playing The Part` is a slight curve ball on all that`s gone before and to follow. A driving drumbeat with some captivatingly quirky and off beat guitar chords and resonating bass. The vocals are almost sprayed gently on top. A quite joyful number. There`s an underlying repetitive beat to `In My Hive` which has some off kilter guitar riffs throughout and quietly shared vocals. A track that headed towards Electronic Body Music at times.

This extended play closes out with `I Need You` and lyrically its more coherent and has a musically mesmeric texture about it. Although quite dark and brooding at times, it did feel slightly reminiscent of a menacing ethereal type of Cocteau Twins number.

There was much to enjoy with `Hologram` which was as iridescent and prismatic as the title would suggest. A Place To Bury Strangers blend psychedelic rock noise with shoegaze and post punk experimental rock and if you’re a fan of bands such as My Bloody Valentine, Jesus And Mary Chain and Spacemen 3 you`ll love these.