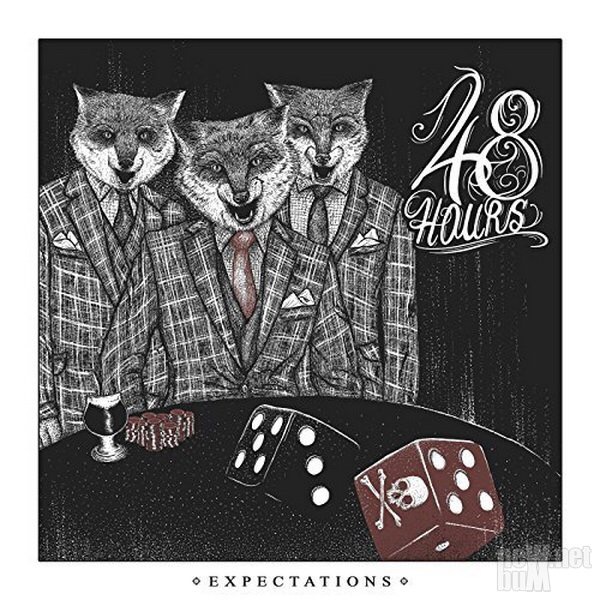 Londoners with dreams of bothering arenas

Watching 48 Hours over the last couple of years, as MV has done a number of times, you can’t help but be struck by how tight and polished they are. In a world where everyone seems to be trying to be raw and wearing inaccessibility as almost a badge of honour, here’s one band who was seemingly saying: “yeah that’s all very well and that, but see that arena over there? That’s where we want to be……”

And even if you never get there, surely theres no harm in having the dream.

So come time for album number two the trio (and it’s a scientific fact that three piece bands are cooler than any other number of members) ensconced themselves in the studio with ex-Mutiny Within man Chris Clancy and made a record that built on what was good about their debut “Recovery” and took it up a notch.

Put simply, “Expectations” soars. It isn’t content with its own surroundings and instead wants a look at where the grass is greener. There’s a belief here. It’s in the choruses, it’s in the hooks, and it’s in the riffs. There’s a dark heart beating in songs like “Given Up” for sure, but it’s a bleakness that is so wrapped up in something accessible, that when Adam Jerome sings about “staring at bleach and pills” you can, if you so wish, carry on enjoying the track on merely visceral level.

“Expectations” is a record that is certainly designed to be played live, each one of its ten tracks could translate into their set, but “Liars” is surely destined to become a fist-pumping anthem, while “No More” is a two and a half minute lesson in tumultuous.

Indeed, this is not a lengthy album and one which likes to get its job done in under three minutes if it possibly can, and if it can work on the old maxim of “don’t bore us, get to the chorus” then even better, and when they get it right, as on “Best Mistake” and “Price You Pay” then there’s not a lot capable of stopping them.

If most of the record is deliberately fast paced, then the ballad “Gone” slows things down, gets its lighter in the air and still manages to pack the biggest punch this side of Alter Bridge, who are a clear influence throughout this.

Unashamedly big, songs like “Forget” show their contemporaries a clean pair of heels, and “Violent Addiction” barely suppresses its anger, while the closing title track features a bass rumble from Gary Broughton, as it ends with the thought that “I am me if you can’t work that out.”

It’s a line that sums up 48 Hours perfectly. Unapologetically aiming for more than they’ve got now, this is a modern hard rock record that isn’t arsed with being “core” this or “post” that, rather it just gets on with its own job and does it very well.

We swore we wouldn’t do this, but “Expectations” is great…..