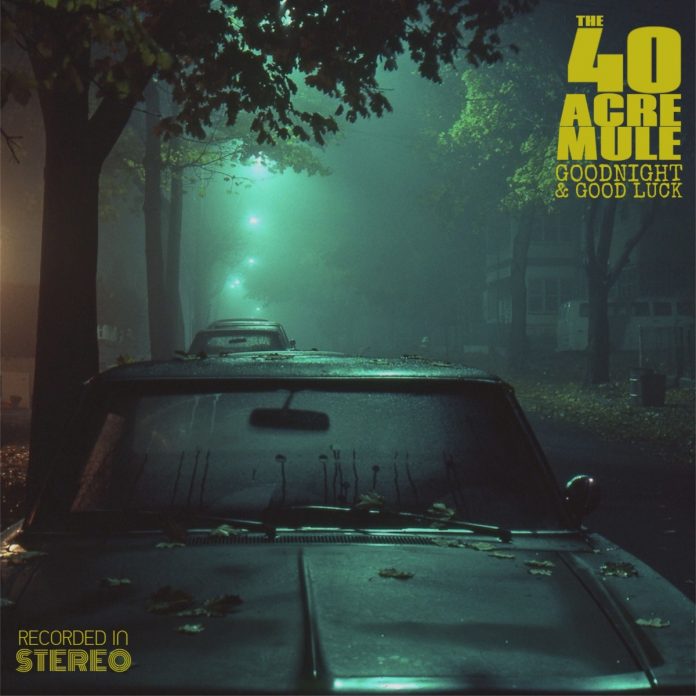 “Goodnight And Good Luck” is the debut album from Dallas, Texas’ 40 Acre Mule. Such a fact isn’t usually important, but it is here, because it’s 2019. And this doesn’t sound like its come out in 2019.

Its not supposed to, either.

The band themselves make great play that they are a “Rhythm & Blues Outfit” – and this is meant in the old sense of the phrase. This is the rock n roll of Little Richard, of Chuck Berry, of course it is, but it’s a little bit more.

There is something primal, visceral, a little violent about the opener “You Better Run” that hints at the blues of Leadbelly and the likes too, something in the sax drenched prison anthem of “16  Days” that hints at the skiffle boom of the late 50s, and even the soul filled – and monstrously catchy – “Shake Hands With The Devil” has “that’s between my maker and me” as its hook line.

Lyrically this doesn’t do much more than discuss how their “baby done me wrong” but that’s sort of the point. That’s what this music was always about. This is pure rock n roll for pleasures sake.

“Make Up Your Mind” ushers itself in the back of a bass groove that is so dirty you need to wash after, but it ends with the revival of the “soul handclap” that is so unashamed  even Eli “Paperboy” Reed would stop in his tracks.

“Be With Me” might come from the same soul place, but it is almost romantic. Made for the slow dance at the end of the night, perhaps, but – and I am not going too far out on a limb here – only so it can get lucky with the object of their desire.

The ten songs here belong to a different era, but the two vocalists approach (J. Isaiah Evans and John Pedigo take turns) give each cut (and you know that this is the sort of band that calls them “cuts” too) a distinct feel. “Something Next To Nothing” is almost stripped down, “I’ll Be Around” builds itself up into something close to Phil Spector – of if you want a modern reference then Nathaniel Rateliff – “Hat In Hand” is almost reflective, “for the first time someone means ‘it ain’t you babe it’s me’” feels like a key line for the whole thing, and this does have a particularly strident guitar solo to go with organ.

This isn’t a record that apologises often, though, and “Bathroom Wall” just wants to get laid. Now and it isn’t bothered by who, in honesty. Not for the first time it has a whiff of fellow revivalists Daddy Long Legs about it – although there is something just a little more authentic about this than the (admittedly brilliant) velvet suited New Yorkers.

“Goodnight And Good Luck” ends with “Josephine” and this is the rock n roll of the Grease soundtrack, of diners, of chaperones at the High School Prom. The sort of America that probably never existed, but always seems to in my English head.

The five piece back this musical approach with a similarly old-school aesthetic. They have toured, they have worked, they have honed their sound, and this is the result – and it is filthy, but oh so sweet.