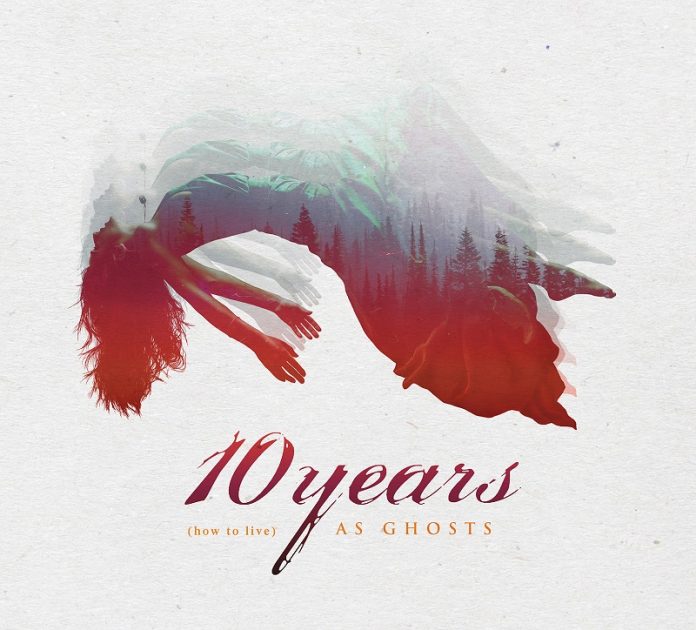 Usually when MV gets a record to review from Tennessee, it is a southern rock or country album. That is not the case here as Knoxville five piece Ten Years have other epithets given to them.

“Alt metal”, “post grunge” says their press pack (“As Ghosts” is their debut release for the major label Mascot Group, home to Monster Truck, Black Stone Cherry and Joe Bonamassa amongst others) but we’ve never quite understood all that genre stuff at MV towers. All we know is that if you like your rock to pulse with an urgency, clever wordplay in your lyrics and – most importantly – a chorus that is designed to fill stadiums, never mind arenas, then As Ghosts are for you.

For “(How To Live) As Ghosts” it’s a case of the more things change, the more they stay the same. These 11 songs see them reunited with Rhythm Guitarist Matt Wantland, and Brian Vodinh, who played guitar and drums here, but will switch to just guitar when they play live. They both sat out 10 Years’ 2015 record “From Birth To Burial) but having them back appears to have given them just the boost of energy they needed.

Working again with mega Producer Nick Raskulinecz (Foos, AIC) “….Ghosts”) sees one big change from the band. Gone on are most of the vocal effects and multi-layered parts of their other work. Instead, singer Jesse Hasek gives a much more personal flourish than he might have before.

It works too. Right from the off, it crackles. “The Messenger” thumps, managing to sound epic in a way three and a half minute tracks seldom do.

An album that deals with weighty issues too. “Novocaine” comes from the standpoint that the modern world numbs its inhabitants, but is done with such an urgency that you imagine it won’t happen here. Certainly, the incredible bass groove at the start is surely designed to shake the slumber?

“Burnout” has a chorus of the soaring variety, “Catacombs” is reminiscent of Feeder at their Polythene era best, and the nominal title track, “Ghosts” is the band at their absolute best. Strident opening riffery, the melodic verse, the pause and the chorus that could move people in their thousands.

That, essentially is the microcosm of what the band does so well here. That is not to say that there are no different shades. “Blood Red Sky” builds to quite a crescendo and is the type of thing that MV faves Kerbdog used to do so well.

“Phantoms” sees them let themselves go a little with a real swagger, while “Vampires” is a lesson in how to do this stuff with clean vocals for all those bands that would ruin this by growling (hello, Periphery….)

This is followed by a change of pace – albeit one with mountainous drums – in the shape of “Halos”, and the award for the most poetic line in a rock song this year goes to the assertion in the pre-chorus that “I cut my feet walking on the eggshells of your stability”.

If that indicates that this is not a record that is going to cover Poison’s “Nothing But A Good Time” then you’d be right, but in work like the initially acoustic and blissful “Lucky You” compels in a much more studious way.

Calling a record “grown up” brings to mind something boring or with no life. As “(How To Live) As Ghosts” ends with “Insomnia” it is neither of those things. Unquestionably, this is not a “fun” record, but it was never supposed to be. What it is, however, is intelligent rock, delivered with plenty of skill. 10 Years are a serious deal in their homeland. Chart botherers by way of routine. With this collection they may be primed to repeat that over this side of the pond too.