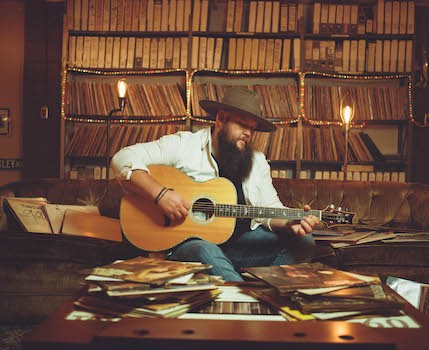 Big Loud Records breakout artist Larry Fleet is headed for the debut of his full-length album, and now shares the roots of his soulful sound with the brand-new track, “Stack of Records”, out today (3/9). Listen here.

As the project’s title track and opening song, the grooving standout serves as Fleet’s Country star origin story, and a swaying tribute to his eclectic influence.

Co-written by Fleet with Ben Hayslip and Eric Paslay, “Stack of Records” speaks to the literal stack of vinyl albums his parents kept at their home in White Bluff, Tennessee. As the talented vocalist was growing up, he became fascinated by the sound of icons from across the American musical spectrum – and that mix wound up helping inspire Fleet’s now-signature fusion of Country, Classic Rock and Soul.

“‘Stack of Records’ is practically an autobiography of the music I listened to growing up that made me want to pick up a guitar,” explains Fleet. “I’m grateful to every musical influence that unknowingly shaped me into the artist I am and I hope I can return the favor for someone else one day.”

The just-released track previews Fleet’s STACK OF RECORDS which arrives on September 24. According to Fleet, the project is a direct result of that fateful record collection. “Every song on this record is based off a stack of records,” he says.

Produced by Joey Moi, the album includes 14 tracks in total – all of which were co-written by Fleet himself – and also features all-star collaborations with Jon Pardi, Jamey Johnson and Bryan Sutton.

The rising talent announced STACK OF RECORDS last week, and along with today’s title track, Fleet has also shared two more examples of what fan will discover: The romantic blast of rural R&B, “Different Shade of Red”, and the spiritually charged Country Soul of his chart-rising single, “Where I Find God”.

Released in early 2020, “Where I Find God” has already racked up more than 32 Million on-demand streams, while its official video has been viewed nearly 19 Million times on YouTube.

6. A Life Worth Living – (Larry Fleet, Will Bundy, Brett James)