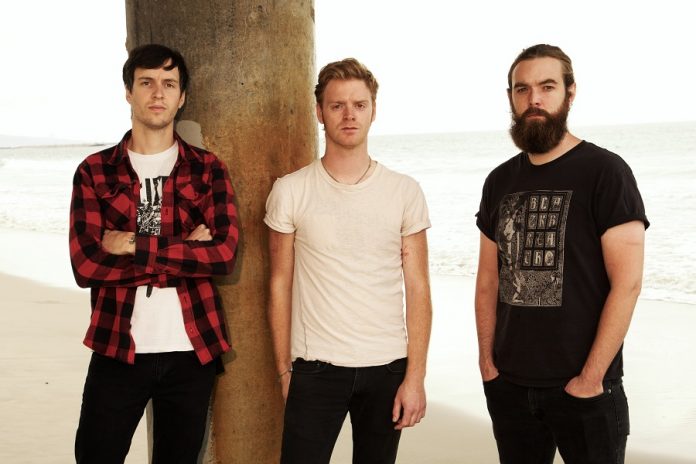 Wild Throne craft music that is as hard to describe as it is exciting to listen to. The hard-hitting and versatile Pacific Northwest metal trio offer up an ambitious blend of thrash, progressive rock, and classic melodic NWOBHM that invokes names like Mastodon, Judas Priest, Mars Volta, Queens of the Stone Age, Coheed and Cambria, and Dillinger Escape Plan.

Boasting a complex and robust sound, the band is comprised of Josh Holland (guitar/vocals), Noah Burns (drums), and Jeff Johnson (bass). Wild Throne have taken the volume and brutality of heavy metal, compositional elements of prog, atypical time signatures, strong melodies, a touch of psychedelia, and some straight-up rock ’n’ roll, then melded them into a multi-layered, many-faceted sound that is their own.

The Bellingham, WA natives are set to release their debut EP, ‘Blood Maker’, on 22nd July in the UK, via Roadrunner Records. Produced by Ross Robinson (At The Drive-In, The Cure), the EP features 4 tracks. The release will coincide with 3 UK dates, including a free show at the Old Blue Last in London.

Watch the video for ‘Harvest Of Darkness’ at: https://youtu.be/Y8CDP_XMNUY.

Catch the band at the following UK dates this July:

Wild Throne follow up the shows with the UK release of their album, ‘Harvest Of Darkness’, on 9th September.  Listening to the 11-track, Ross Robinson-produced album’s depth and range, it is hard to believe this band comprises just three people. But Wild Throne is no stranger to crossing boundaries, not just with their music, but also how they play it. “We really wanted this album to have a more dynamic presence than anything we had done in the past,” says Holland. “Musically and lyrically, we wanted to make sure it had a kind of pulse—that it be very human and flawed but alive and still a good listen.”

Although Wild Throne’s music is highly technical, requiring pinpoint control and precision, it’s not sterile. ‘Harvest of Darkness’ is rife with passion and emotion, anchored by lyrics that explore the human condition – an emotional exploration that’s personal and universal.  The album’s titular first track is an excellent distillation of what’s to come, and is, Holland says, “about hanging on to negativity and resentment and then answering to the consequences of doing so down the line.” ‘Fear Yourself’, the album’s most anthemic song with machine-gun drums and arena rock stylings, mines similar territory, that of “staying out of your own way,” Holland says. “I think a vague fear of failure is pretty normal and the song is about crumbling under that fear into the realm of self-sabotage.” Talking about track ‘War Is A Romance’, Holland explains, “Humans tend to seek out both love and war instinctively. Rather than thinking of them as opposites, I wanted to suggest that the intensities of violence and passion actually share more similarities than differences. That the hunger to fight is some sort of inner romance. We lust for it.”

If ‘Harvest Of Darkness’ brings up one question about Wild Throne, it would be this: Why choose this road less travelled when they could easily succumb to making music that’s not as intricate, less personally demanding, not as risky?Holland’s answer strikes at the heart of what makes Wild Throne a compelling listen. “Making music that is simpler, less technical, and more accessible would actually be the real challenge for us,” he says. “We do it the way we do because it comes naturally to us.”