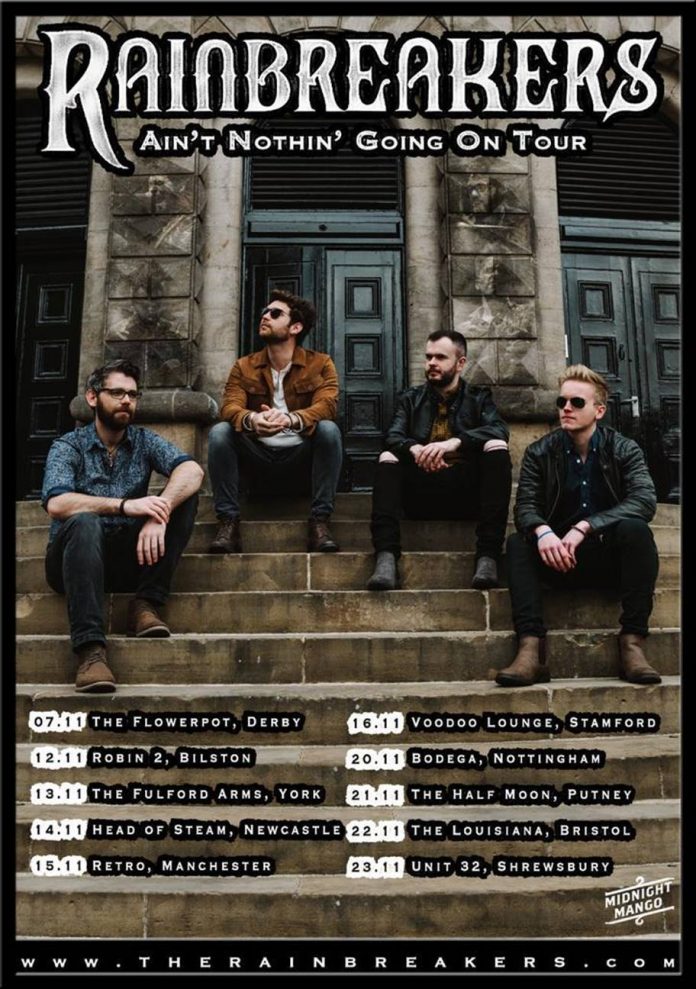 Following impressive Summer Festival appearances at the likes of Cornbury, Ramblin’ Man and more, West Country Rock n Soul Rainbreakersare proud to announce their full-set UK headline tour, ‘Ain’t Nothing Going On’ in November 2019. The band are also delighted to announce that they’ll be supporting the fantastic Alabama 3 in August. What’s more, this talented, hardworking 4-piece outfit will also be touring the Czech Republic in October and early November.

It’s been a busy twelve months plus for Rainbreakers, who last Summer released their their debut full-length album Face to Face, and have been increasing the size and scope of their touring (e.g. touring as special guests with their good friends Wille and the Bandits in March 2019).

Rainbreakers take late-Sixties and early-Seventies British rock and bring it bang up to date by generously mixing in soul and garage as Classic Rock Magazine describes them”70’s meets garage licks”, then adding a zesty dash of contemporary blues-rock. They’re known for passionate, powerful live performance and have already toured across the UK and mainland Europe, sharing stages with artists like The Temperance Movement, the Kris Barras Band, Samantha Fish, Devon Allman, Wille and the Bandits and Laurence Jones.

“Playing live is what we live for,” explains singer/guitarist Ben Edwards, “so to be able to get back on the road and play a full headline show will be great. We have been playing a lot of support shows lately with some great bands. However, this tour will be our full set and our full show and will give our audience a real chance to find out what we are about. Plus, we have some new original material to share which is always exciting!”

Rainbreakers have also been playing to capacity crowds at iconic venues such as The 100 Club, The Borderline, The Sage, and Rock City. What’s more, performances at festivals like the Great British Rock and Blues Festival, Wilderness Festival, and Ramblin’ Man have seen the band receive rave reviews and many an accolade, including nominations for the UK Blues Challenge and ‘Best Emerging Artist’ in The British Blues Awards, affirming Rainbreakers’ standing as a band to watch.

Skid of MMH (Midlands Metalheads), for example, praised the band’s dynamic, high quality performance at Ramblin’ Man: ‘A quality 4-piece which blends rock and soul entwined round the core essence of blues… this was subtle well-crafted music for the more connoisseur listener — more fine dining than fast food.”

Before undertaking their own UK headline tour in November, Rainbreakers will be Alabama 3’s special guests at North Wales’ legendary live venue, Tivoli, on Friday 2nd August, and are looking forward to the gig “My Dad introduced me to Alabama 3 when I was a kid and I always digged their sound,” says drummer Sam Edwards, “so to get to support them and meet them is a bucket list event for me and I can’t wait!”

Rainbreakers will also be touring the Czech Republic between 21st October to 3rd November (full details below and on the website).

Check out this rising, already-respected band, especially if you’ve got the chance to experience Rainbreakers in their natural habitat: live performance!