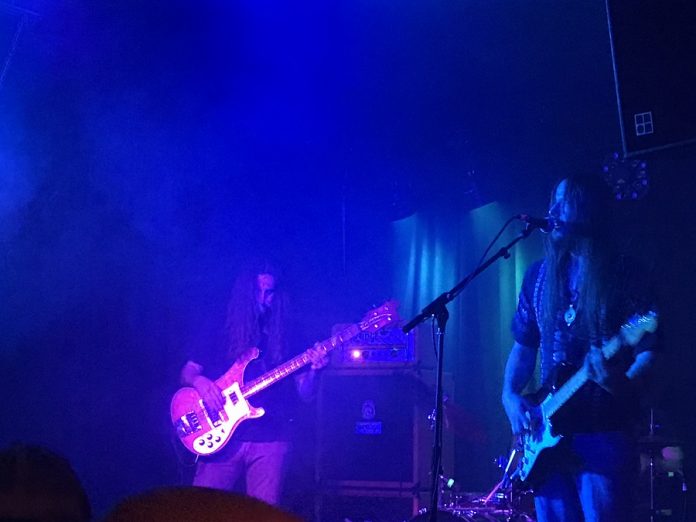 Tuning in and dropping out as San Diego trio hit Birmingham

Parker Griggs at first appears to be the master of understatement. He says: “We’re excited to be in Birmingham for the first time, we are gonna play some songs for you.” And that, in a nutshell, is what Radio Moscow do for the next 75 minutes.

Blues, but not as you know it. Instead there is a wilfully psychedelic side to the trio. Theirs is a world where guitars are mighty, but with an air of the 1960s and where songs can cheerfully take themselves into a dream-like state.

One of those gigs too, where the band is touring before their new album comes out means older material mixes with new stuff without a care in the world, and even though they might be hearing many of these songs for the first time, the large and enthusiastic crowd buys into the concept fully.

Largely that is testament to the fact that when Radio Moscow lock into a groove they are a serious real deal and play as though their lives depend on it. “Death Of A Queen” is absolutely relentless, “Broke Down” is resolute in its idea that the sound should be huge, but always with a foot in the blues so as not to forget its roots.

“New Beginning”, the title track of the new collection – out this Autumn – is a highlight, “250 Miles” is reminiscent of the primal blues of The Picturebooks and wallows in the swamp before soaring somewhere totally different.

Much of the power comes from the rhythm section. Anthony Meier wrangles some fuzz from that bass, while Paul Marrone attacks the kit with a rare vigour, meaning another new track “Dreams” comes alive.

It acts as the full stop to the main set, while “Before It Burns” is a fine postscript. Ending in a wall of feedback, they can be pleased with the result of their first trip to the second city. There is enough here in Radio Moscow’s performance to ensure people will come…urmm… Russian back next time too.